As promised, a few more for Halloween by JBM! Have a grreat Tuesday! And OH yes, remember that Tampere Tease returns this Saturday with a Halloween Special featuring my girls Sandy Jungle and Pepper Sparkles among others <3 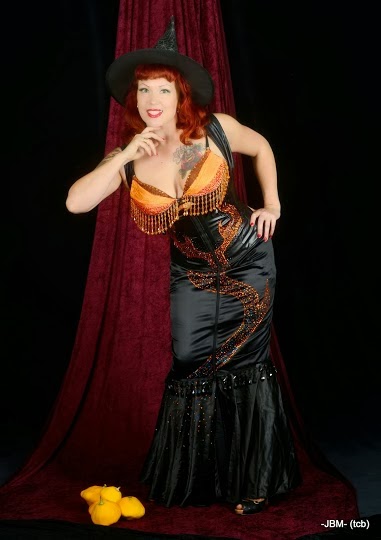 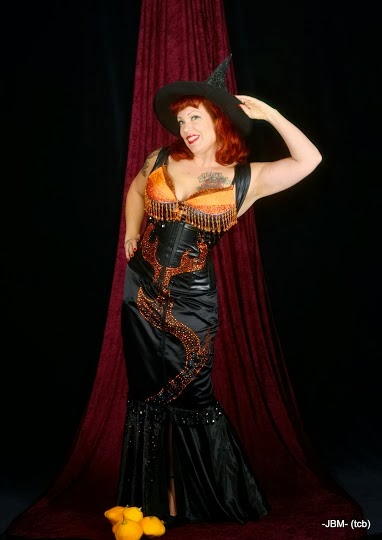 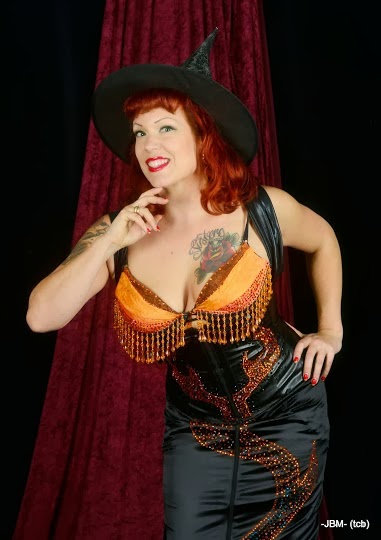 Posted by Gigi Praline at 8:59 PM No comments:

It´s pumpkin time again! Spent last Saturday with good friends, ate my first raw food vegan pumpkin pie ever (it was REALLY good!) and had spiderwebs in my hair :) I´ll try t post some of the Halloween-themed pictures that we took with Jari here this week, starting with this funny gif he made of me! Have a marvellous ghastly week everyone!

The pictures from the Gala keep popping in! Here are some fantastic shots taken by Tuomas Lairila, thank you <3 Also notice the amazing headpieces made by Fiona Timantti!!! 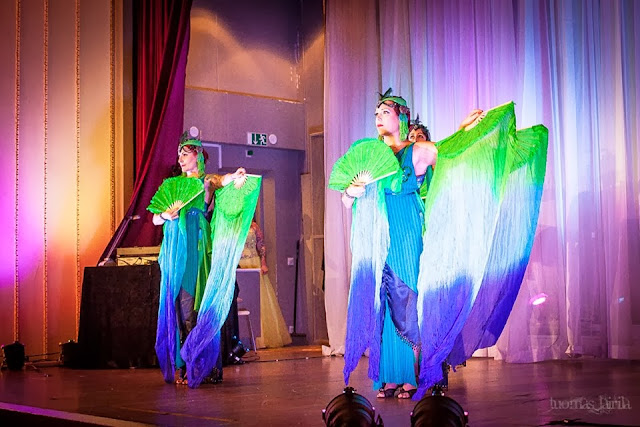 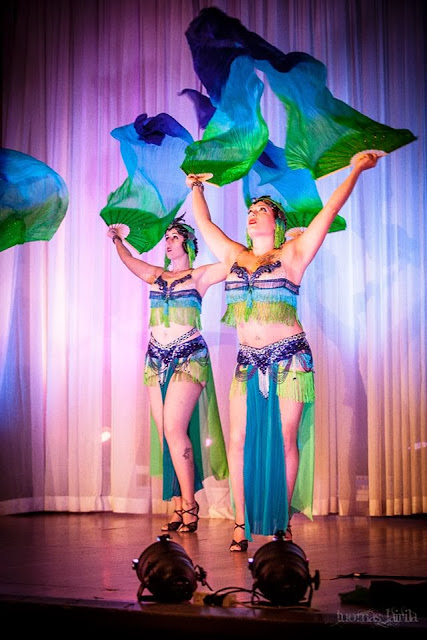 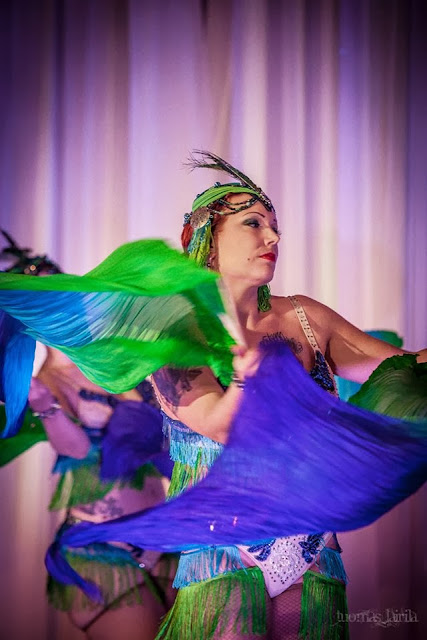 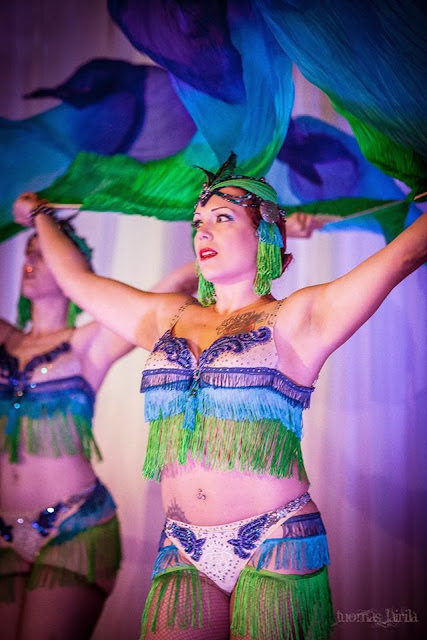 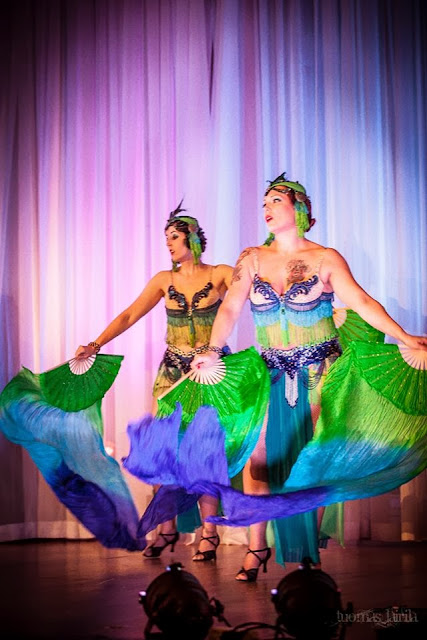 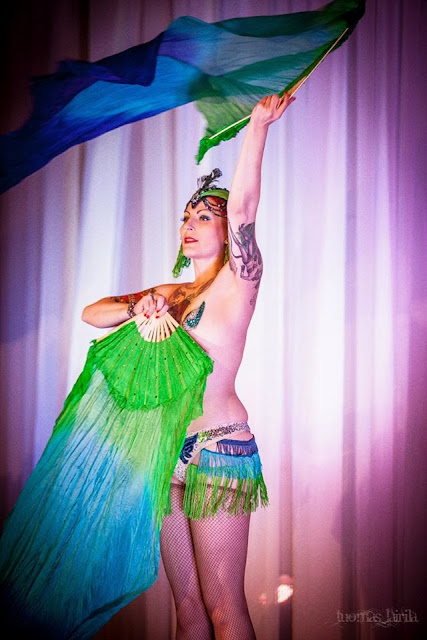 Posted by Gigi Praline at 8:40 PM No comments:

The Gala was quite amazing last weekend! If you want a little glimps of the glitz, here's a link (only in Finnish, sorry) with a short video attached! Our new group number "Aurora Borealis" was a success, I'm so proud of my girls! Me, I am just happy that I did not faint of nervousness before. I had like the worst case of stage fright in a looong time :) A slight cock-up yes, but not a bad show for a first. We got really good feedback, so thank you peeps <3
It's back to school marnie as of this week again, good to be back with some teenage energy! Have a greatnight, I'm off to yoha and will leave you with a couple of shots from our number-all taken by JBM. 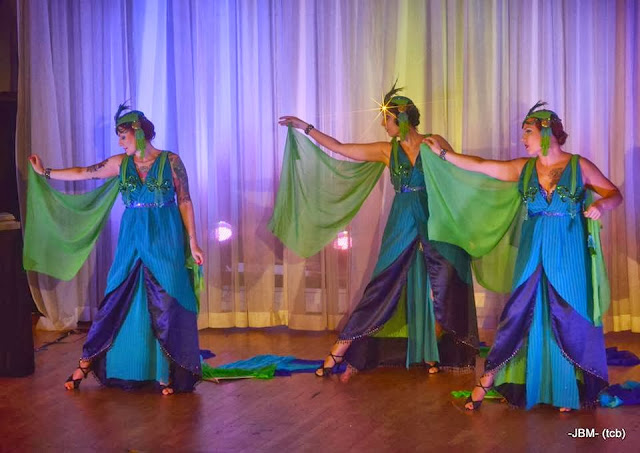 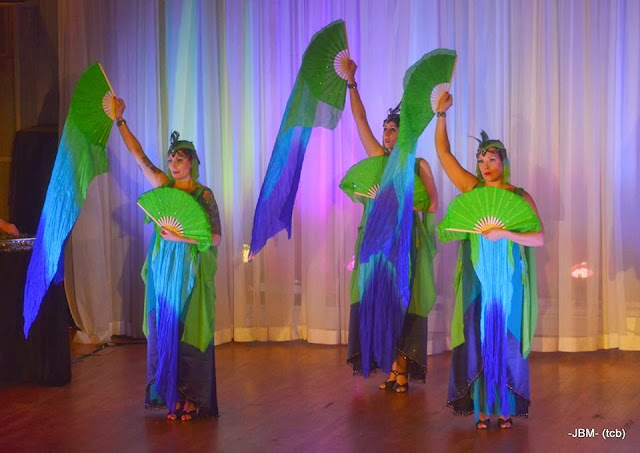 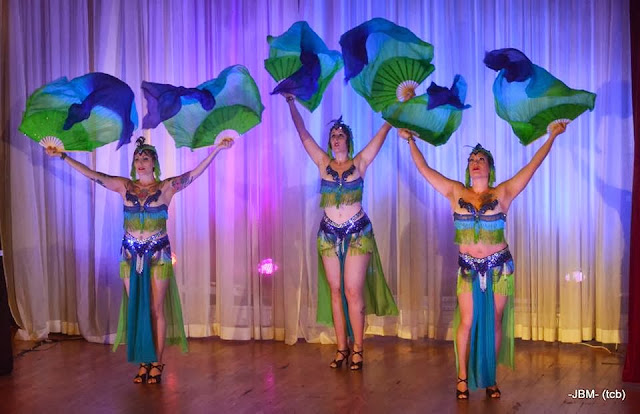 Posted by Gigi Praline at 6:03 PM No comments:

Yesterday I had a photoshoot with Jari B. and we took some promo pictures for Halloween and Christmas. One has to be in good time with these things haha! Other than that this week has really been about yoga and finishing touches to the Daisies outfits. I made myself a promise: I´m going to master a handstand before this year is over! Crazy. Especially for me: I have NEVER been able to do it and I have balance-issues. But well, here I found myself signing up for a 2-day handstand workshop! It´s about going to that space of feeling out of your comfort zone and learn new things. And I´m sure I´ll get a good core-workout if nothing else :)

Here are some snaps I took yesterday at the shoot, the final pictures will appear at some point... Oh, and P.S: the Finnish Burlesque Gala is almost sold out so now it´s really time to get those tickets!!! 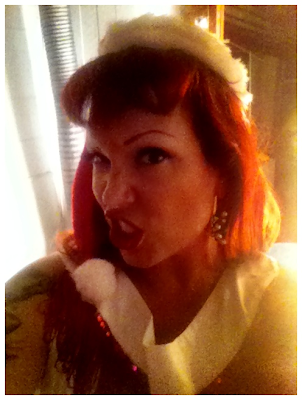 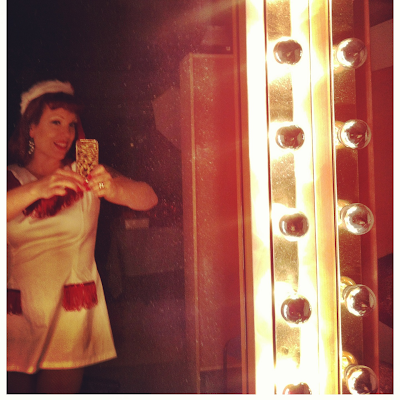 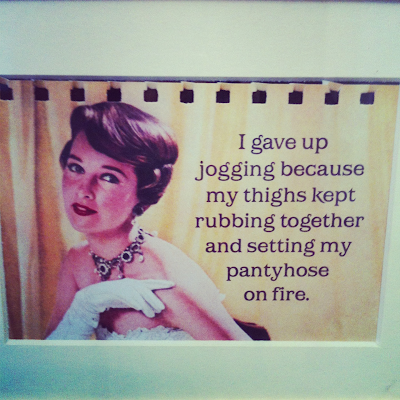 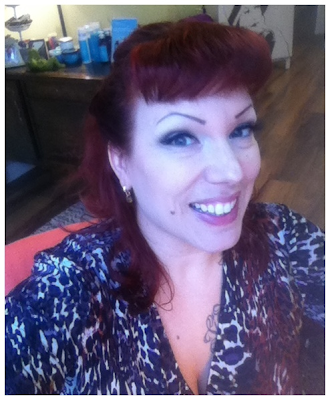 Posted by Gigi Praline at 1:58 PM No comments:

The tickets for this Saturday's Finnish Burlesque Gala are almost SOLD OUT so hurry if you want to come check out the most glimmering, shimmering and shimmying crowd of this Autumn! We have been busy with thee Dizzies, poor Pepper has been sewing her butt off, and there still is some bedazzeling to be made for that new number that you will see at the Gala!
Tonight has been somewhat horrific, both husband and dog had to be hospitalized (both alive & kicking but it was scary) so I'm a bit shaken up... Long story. Thankfully I had a glorious day of gardening before all hell broke loose so the feng shui was alright...
Be safe and stay outta trouble! 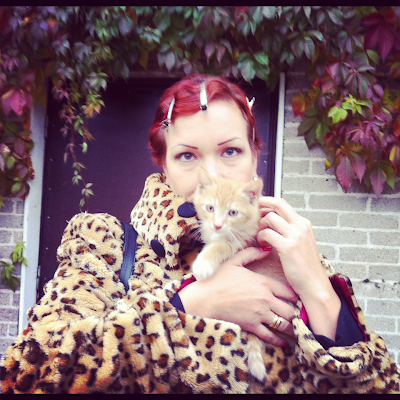 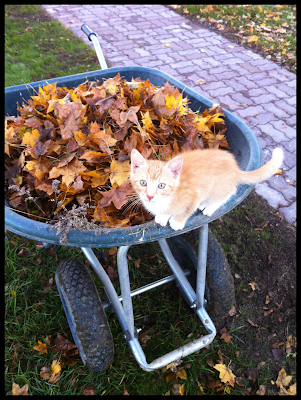 Posted by Gigi Praline at 1:43 AM No comments:

Yes, I agree: lets enjoy the glorious October and Eve of All Hallows but come on, Yuletide is here before we can sneeze. So let's not deny the obvious but mark your calendars for the 14th of December when The Ravishing Shangri-La Rubies Tinker Bell and Cherry Dee bring us Under the Mistle Tease- A Yummy Yuletide Revue in Helsinki! On stage yours truly, Bettie Blackheart and Bent van der Bleu and there might be more!!! I shall keep you posted.
Now, I'm outta here and off to rake those leaves! Have a good weekend!

Posted by Gigi Praline at 1:14 PM No comments:

No amounts of ginger nor lemon could keep me healthy, unfortunately. I have been sick with a flue, home on the sofa but feeling much better already. As in I don't cough my lungs out every time I try to speak or feel like fainting when I stand up - hooray! I also got a text from Kiki Hawaiji saying my signed photo from Luminous Pariah is in the mail <3 Still very bummed about not meeting tha man. Oh well, another time!
Even Blogger got that annoying thing fixed so I was able to update my gigs here! Just as a reminder: me and my colleagues are availeable for performances at e.g Xmas parties, for workshops and for pin up modelling in case you want to book us. We still have some free time in our schedules but be fast! I'm flying outta here on the 17th of December so if bling is your thing hurry!

Ive said this before but as a reminder: what is the best way to hide tired eyes? No, it's not concealer although that works wonder as well...but my solution is red lipstick. Not on your eyes, silly but on your lips! When you have beautifully painted lips nobody will notice those eyes. Plus never forget glitter! As the gorgeous Alotta Boutté put it (here somewhat freely remembered): "if it wobbles slap some glitter on that puppy!" White eyeliner inside the corners of your eyes and glitter lips and I guarantee you´ll feel better ;) Oh, and if you can fit in a little leopard print somewhere -even better!
Hm, after writing all this I feel like I should take me up on my own advice. I wonder what the hubby would say coming home and finding me on the sofa watching "Lewis" looking like I´m about to hit the stage...It´s almost worth the try just for that face!

I have been wanting to take some before and after-photos since the difference with and without make up ( especially stage wear) is obviously huge. We are in the business of make-believe after all, so to be able to create illusions one often needs to use those latex-based paints haha!
These aren't great photos but you will see the point. Have a great day and please wear warm stuff and stay healthy!

You have no excuses, you really ought to be here! More info here !!!
Posted by Gigi Praline at 8:59 PM No comments:

Hey again,
for some reason blogger won´t let me update my GIGS-part here so FYI: two dates have been added.

Hope this fault is fixed SOON...hello Blogger-people!!!
Posted by Gigi Praline at 3:37 PM No comments:

The week has started somewhat busy and so it continues! Next weekend I´ll be performing at two private perties which means that unfortunately I´m missing the Turku Burlesque Weekend including the Newcomer´s Night on Friday and the "Neon Safari" on Saturday. If you are on the West coast do NOT miss this! There will be amazing performances from the Luminous Pariah and Hedoluxe and many, many more!!!

Pepper Sparkles, Sir Willy Waterlily and the Itty Bitty Tease Cabaret will be all at the Stockholm Burlesque Festival this Friday - nice Finnish line up there ;) I´ve heard it´s sold out... Drop a tassel, my friends!

On a more serious note I´ve read today a great column by Carina Kolodny on The conversation you must have with your sons. It´s a very good read that I recommend for EVERYBODY, even you who don´t have any kids of your own. It´s spot on about the double standards we -maybe often unintentionally-, carry on to the next generations. Why do we tell girls to "be careful how you dress so you don´t give the wrong impression" while "boys will be boys"? Girls and women still get more easily labelled "sluts" and "easy" -often totally without any real justification, while sexually active (straight) boys and men are easier called "players" which carry a totally different tone (and less labelling). We really need to stop demonizing female sexuality as something that needs to be kept "under guard". We need to stop putting guilt and shame on girls who choose to be sexually active. If it´s ok for boys why is it not for girls? We might judge fundamentalists in other cultures for misogony but often fail to see that our culture is not that perfect, either. It might be different but that does not mean the work with this is done. And I´m on purpose not even going into the heteronormativity of this but I´ve talked about it before.
It starts with things like teaching our young ones how to talk and how to act with other people. It´s VERY MUCH about the words we use and adults letting slutshaming go "unheard". Girls can be as cruel to other girls, it´s not acceptable, either. And as adults we need to start paying attention to the norms  (as in unwritten rules) we portray and start thinking about the stuff we say and how we say it.
There has been horrific examples of gang rapes where the victim has been blamed (by the whole surrounding community, none the less!) or where girls are held accountable for the way men objectify them (link in Carina´s post) - it NEEDS TO STOP.
So if you do nothing else tonight, read this.

Other than that, it´s toodle-doo and have a grrreat night! Love, peace and happiness to ya´ll!!!

Posted by Gigi Praline at 10:31 PM No comments: