I´m finally at home again, listening (by request) to Baccara and having a glass of red wine while our faithful houseman is preparing a smoked salmon salad. I´m a spoiled bitch. I´m not really writing this to brag (...well, maybe a little) but because I wanted to share some thoughts about the importance of words with you. I´d love it if you´d give me yours in response.

It all started with a facebook-post Tinker Bell had last week. Well, not Tinks per se but her "everyday persona". It was a very thought provoking thing about how modern men are taught by society to hate women. You can read the article here. It got me thinking, once again, how important the words we use are. Working with teenagers one without mistake (almost on a daily basis) comes in contact with foul language, name-calling and basically young people trying to portait a certain image of cool and nonchalant (trust me: I grab *every* opportunity I get to discuss the meaning of "what *exactly* do you *mean* when you call him "homo"????!!! They hate me but point gets across).
So no, I´m not talking about that. I´m talking about guys calling each other "bitches" and the girl who does well "having balls". Actually, also the fact that guys call each other "homo" and "gay" when somebody acts "out of the heterosexual man role" fits here.

We live in a society where people still laugh and snicker when a guy wears a dress - unless he´s Scottish. I don´t mean stage wear, I mean that I´ve seldomly (apart from my own partner) seen a straight man wear a skirt instead of a pair of pants. And it doesn´t have to be frilly dresses, there are actually skirts designed for men, they are called skorts. You should see the raised eyebrows :)
A dress, as anything else that is conceived "feminine" is perceived as lowering your status, that´s why it is funny. I very seldomly hear anyone call anybody else "a bitch" meaning something positive, strong or "ballsy". Sometimes we women might use that as a word when talking about ourselves (I do, at least. Because sometimes I *am* a bitch and there´s nothing really nice about it) but using it about someone else...rarely a good thing. "Balls", on the other hand, means something strong, someone who can take his/her space and doesn´t make excuses about stuff. It really made me wonder.

I want to live in a world where guys can show emotions, hug each other and be "soft" without being labeled as "feminine" as it´s a bad thing. I want girls to be able to sleep around ("like guys"- the old whore/player thing and YES- it still exist I´m sorry to say. Ask any teen), be loud and smash that glass roof without being labeled ugly, unattractive or "unfeminine".  I want to live in a world where the label of feminine/masculine is equal. And where , if you don´t want to: YOU DON´T HAVE TO USE THEM. Things are not black and white. Anyone over 20 should know this.

Words matter. Don´t say shit you don´t mean. It´s real simple even if you would not be any kind of a believer: Do to others as you´d like to be done to you. Same goes with words: don´t say shit you don´t fully understand and please think before you speak. The word is more powerful than the sword. They hurt, they mend and most of all: they can carry on centuries worth of norms and traditions that most of us shrug about but we still use.

P.s I´ll still call you bitch Jac. Because both you and I know what we mean with it <3

P.p.s here are some pictures from last nights gig!


Posted by Gigi Praline at 8:55 PM No comments:

I went to my faculty party on Friday and wanted to try the glittery eyes that I have seen Turbo Cherry Dee have on a couple of occasions. I asked her how she pulls it off and got some great tips. Usually, colorful glitter is a bad idea on the face unless you go for something wild since it´s really hard to keep in one place and it ends up making your face look dirty. Cherry´s tips: use a eyeshadow of the wanted color (I used a turquoise one with a lot of pigment), then add a glitter-glue and only after that the loose glitter. The glue will make everything stick. It´s really not that hard and didn´t take up a lot of time. I have quite heavy lids so next time I think I´ll put the color a but over the actual moving lid. Add liquid eyeliner and false lashes and your ready to go! Cherry has some great style inspiration and hair tutorials and other good stuff on her The Freelancer´s Fashionblog, you should go check it out! I´m off to pack my bags again, we have a study-meeting with my sex.education group and I´ll be cat-sitting at my mother´s. I´ll get to perform my "Kiss" at a private party next Thursday but remember to get tickets to Boom Boom Burlesque if you want to see it 5th of April ;) 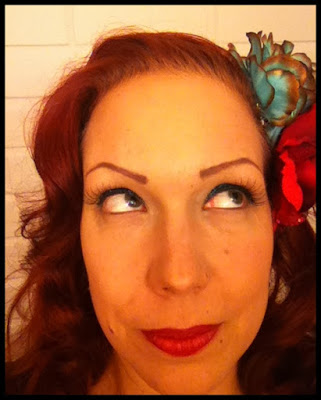 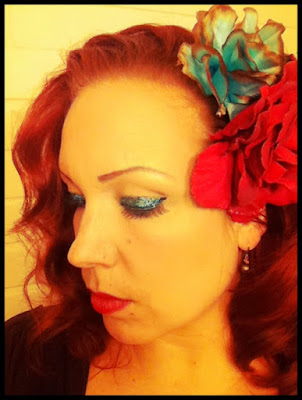 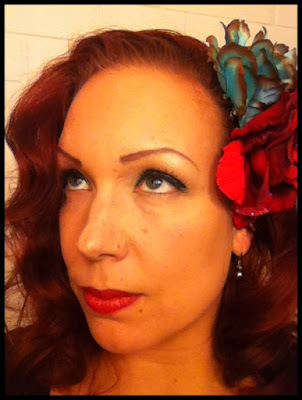 Posted by Gigi Praline at 10:34 AM No comments:

I did a photoshoot with the wonderful, funny and very talented Kaylin Idora while she was in Finland during the Helsinki Burlesque Festival in Febuary. I got the first picture from her today and thought I´d share it with you. Have a great Thursday! <3

Come join us at Navy Jerry´s Rum Bar the 5th of April for a fantabulous setting of burlesque and tiki-drinks! The event can be found here! On stage:

Tickets from http://www.tiketti.fi/!
Posted by Gigi Praline at 4:23 PM No comments:

The sun is shining, the coffee is black and bitter and I´m swearing myself off high heels for...well, at least 24h :) I´ve had such a great weekend! Roadtrip with Sandy on Friday to Turku for a private gig where I popped the cherry on my new number "Kiss" and last night Thee Dizzies had the pleasure of performing with Capital Beat, Tommy "Father Metro" Lindgren and The Backbeat Singers at the St.Patrick´s party @ Virgin Oil! The hoopla was hosted by Jameson whiskey and apparently some of the gig was streamed live to other parts of the world where similar shows were hosted. A big thank you to everybody in the band and at the venue and a special squeeze to the audience for rooting the roof off!
I thought I´d post some backstage pictures for you, there will be gig pics later taken by the wonderful Emiliano Melantri. In the words found in one of my heroes, Stephen Fry´s, book: " a small proportion to be spent on production, the rest on wine and senseless riot". If you can´t be good, be careful! Ta! 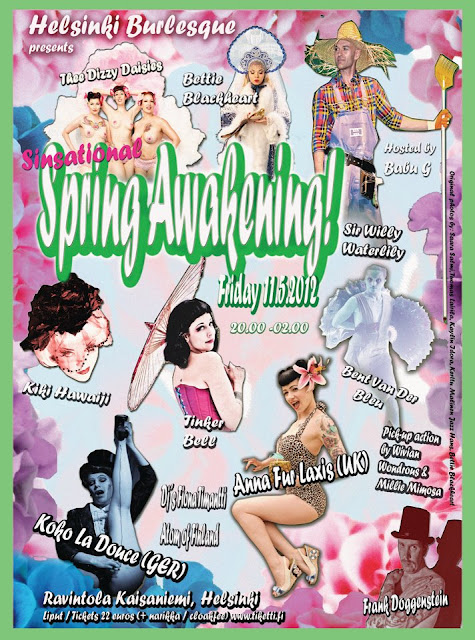 Yes yes yes! Spring is finally here! One can see sand and green(ish) stuff peeking out from under the snow, the birds are back and the hormones are running wild! Come celebrate Spring with us in May @ Ravintola Kaisaniemi!!!
Posted by Gigi Praline at 9:37 PM No comments:

Performing with a live band has been a dream of mine for a while now...While scary I think it brings great opportunities and can really work on that oh-so-needed stage charisma. Maybe the stage-fright as well :) Thee Dizzies got a great opportunity to perform live with The Capital Beat next Saturday 17th of March at Virgin Oil Co. in Helsinki since our "Naked" is, well- their song! I hope to see you all there <3

Here´s the boys with an old video for the ever groovy Mr.Armstrong
Posted by Gigi Praline at 10:27 PM No comments:

HBF part 2 and some sex

Spent the night at Raspberry Fields practicing both "Naked " with Sandy and Pepper (upcoming gig live with The Capital Beat at Virgin Oil 17th of March!) and doing my new number that I´ll perform for the first time the 16th at a private party in Turku. Helluva lot of sewing and glueing still!

There is some good stuff a-coming this Spring but I´ll get you updated later on that. Now I will continue to read my sex books...yup, all I have been reading and don´t you go calling me names-
it´s for my sexual counceling education. I hope to graduate next Spring and continue to study sex.therapy. Since I´m so far out of a job from next Fall this all is up in the hands of some greater power and I try to concentrate on glitter and feathers to avoid a total panic. My next seminary is going to be (among others) about the multitude of gender, BDSM as a lifestyle, sexual preferences and parafilias and trans- and other identities. I´m so excited about this class! For once it´s all *really interesting*, you know none of that mandatory statistics ;) Also planning to do my final graduate work about burlesque performers body image and if burlesque has changed that and if yes- how? If any of you have good ideas about questions I should ask or other points you think I should take into consideration please let me know! You can e-mail me on gigi.praline@gmail.com and it will be hugely appreciated!

But alas, here are the pictures from HBF, Saturday 17th Febuary! Enjoy <3 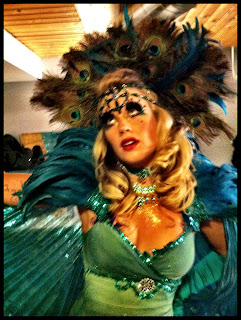 Posted by Gigi Praline at 10:57 PM No comments: