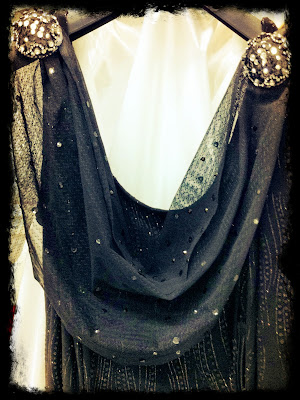 Tonight Thee Dizzy Daisies got together for some planning and while getting our brainstorm going I finally got some more bling done on my solo-outfit. It takes *a lot* ...This collar in the pic here for example has been slowly but surely getting rhinestoned and sequenized (nice new word there) and I still don´t see an ending... More is more...

Posted by Gigi Praline at 10:06 PM No comments:

It´s Thanksgiving weekend and even if it´s not celebrated here in Finland my thoughts have been somewhat "thankful". I had a wonderful dinner with friends on Friday, I´m finally over the flue and today I lighted the first candle for Advent. Four weeks to Christmas! Time flies. This time last year we had loads of snow, now it´s all grey and *wet* so I´m really looking forward to our Xmas escape to the sun.

I´m also really thankful for laughter. Humor is such a funny thing, ain´t it? And with friends that really becomes all-important: if you share the same kind of humor you´re set. Same with your lover, I guess. Laughter can be such a private thing, it can be misinterpreted and used for hurting feelings as well. But a good shared laugh is one of the best things in life. That´s why as much as I love those classic burlesque-acts I really, really enjoy when I get to see something that makes me crack up!

What really made my day was finding a link on facebook about the best musical acts in The Muppet Show.  Pure brilliant anarchy! So here, to make your Sunday-night: Mahna Mahna - a song by Piero Umiliani that was originally used in an Italian softpornish "documentary" about Swedish alcoholism, suicides and sexuality!!! This version really made me laugh!

Posted by Gigi Praline at 3:29 PM No comments: 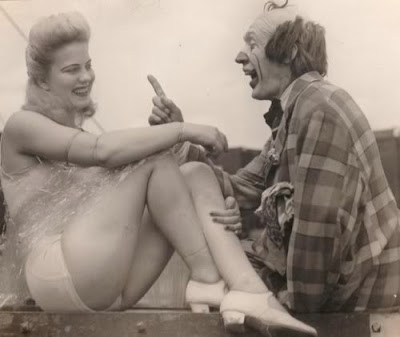 ...when I´m bored I think about how it would have been to run away with the circus.

But then again... I do like some stability and I find clowns to be a bit scary (for this I blame Stephen King´s novel "It" which changed my perception on clowns forever)...

I have found my crowd of "strange people" with whom I feel very at home. People, who are very hard to label "this or that" and who aren´t afraid to be themselves, who courageously fight for equality, brother-and sisterhood and love  -and who all in their own way believe in tolerance and respect of all things different.


You know who you are and this is a big virtual hug and kiss to all of you! 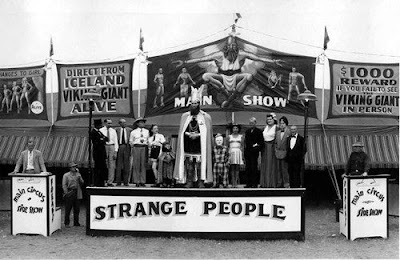 Posted by Gigi Praline at 7:34 PM No comments: 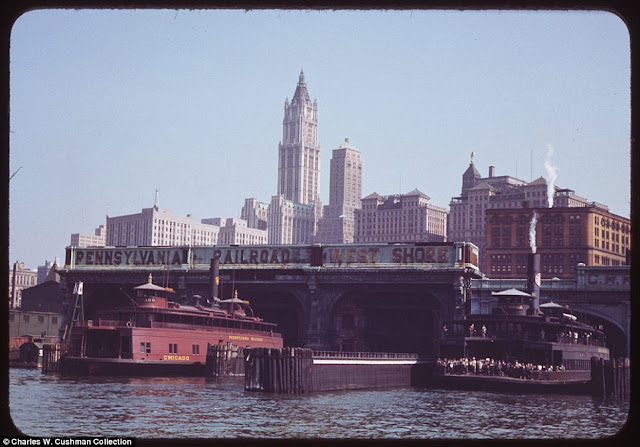 New York, New York.
Here are some pictures taken by Charles Cushman in 1941 and 1942 in the City that never sleeps. Put on the Tom Waits song and dream yourself away. You´re worth it. 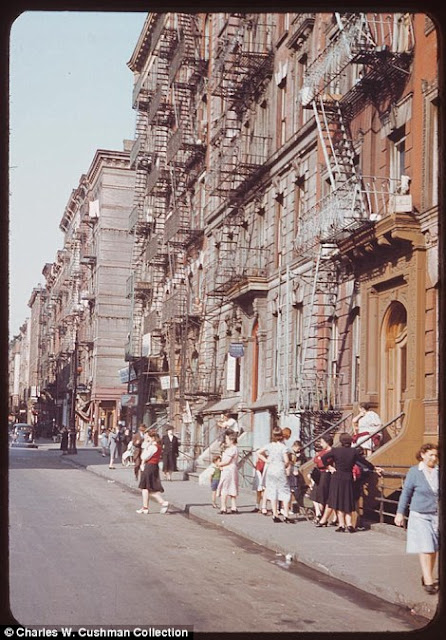 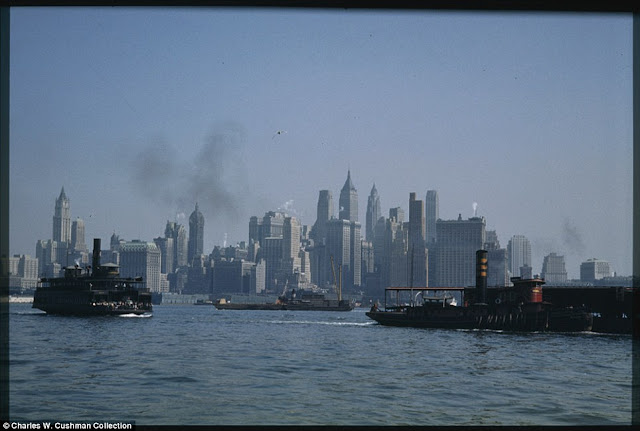 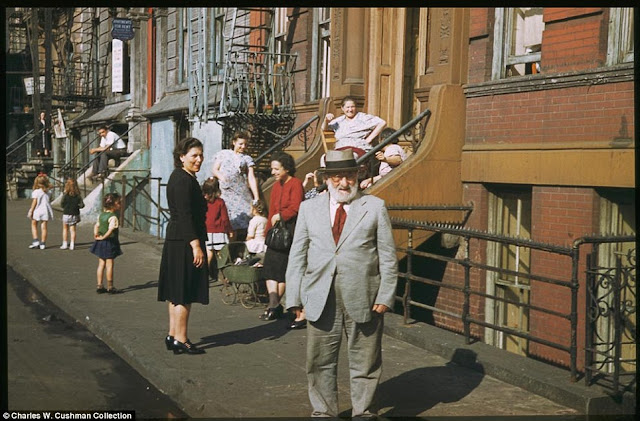 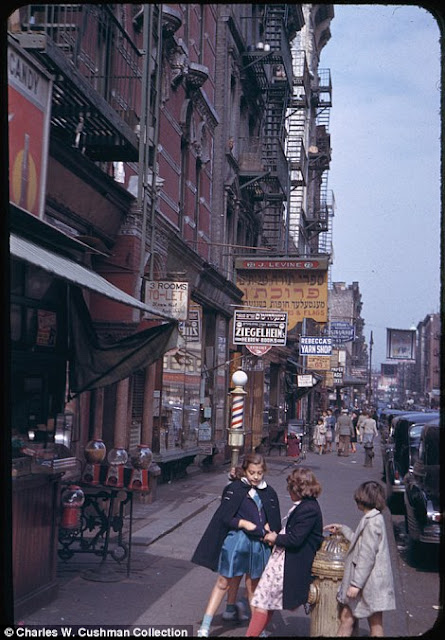 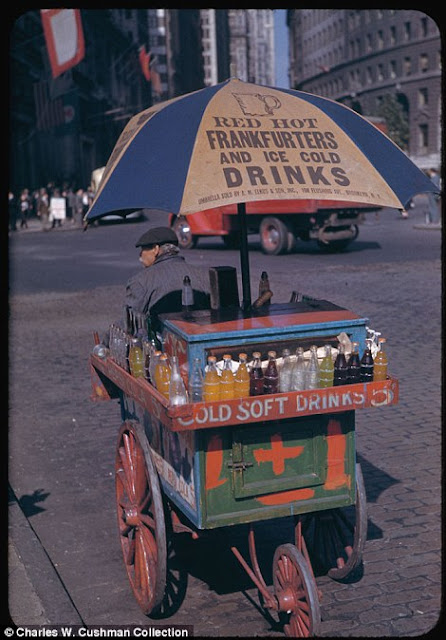 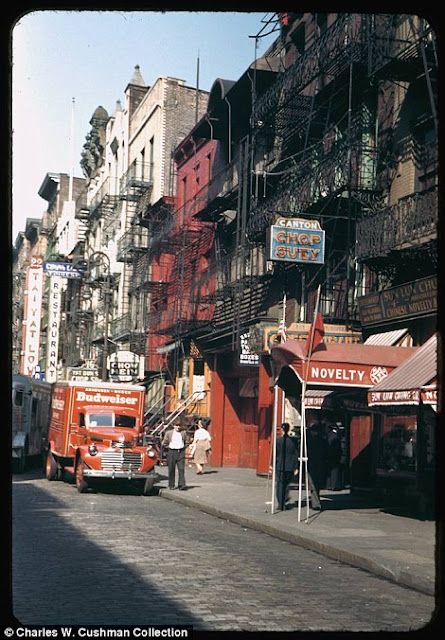 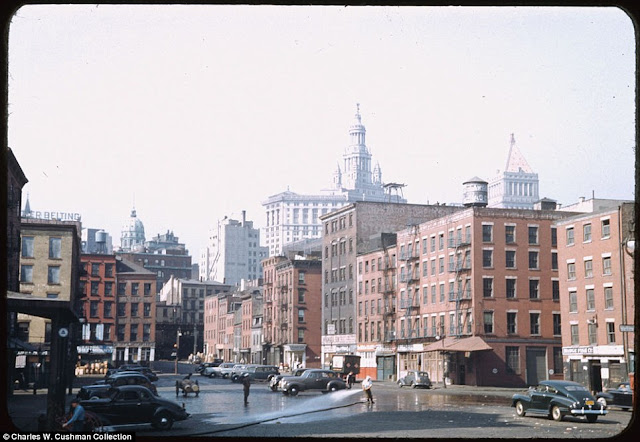 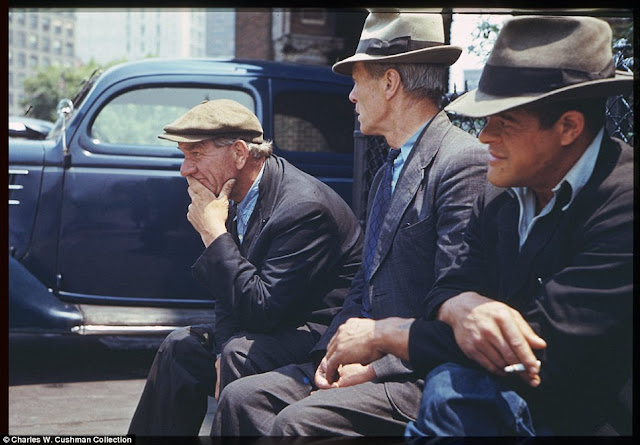 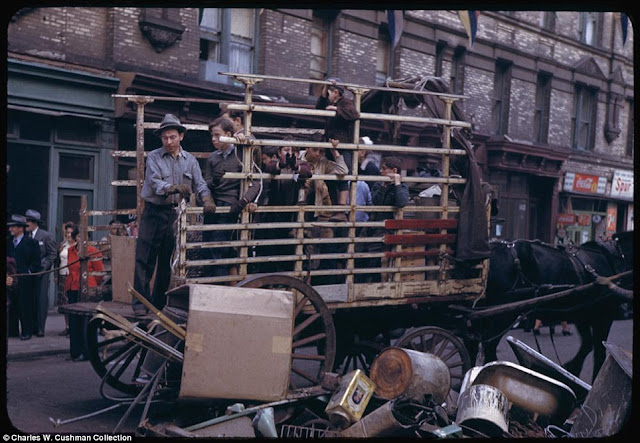 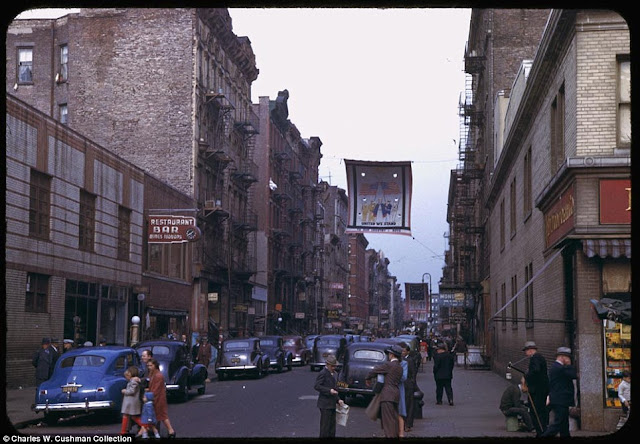 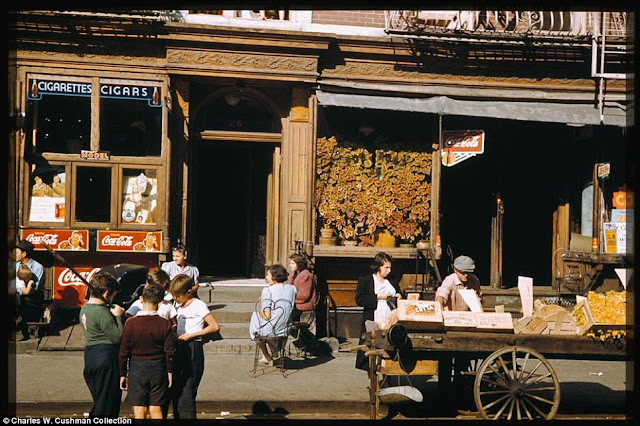 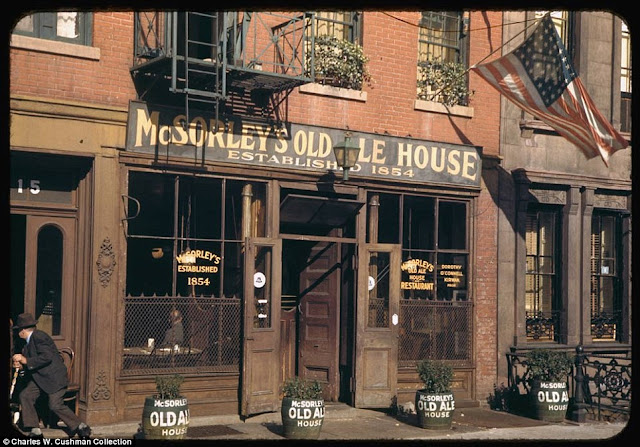 Posted by Gigi Praline at 1:56 PM No comments: 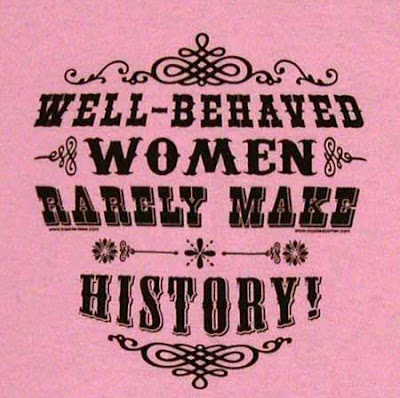 Hello lovelies!
It´s Friday again, and I´m down with a cold again. I have no idea how this is possible...it seems that my Autumn has been filled with cough, snot and headaches. But I´m not here to complain, no Siree! Well, not about the flue anyway.
When I was in California on my honeymoon (it´s a while ago for sure!) I found a great bumper sticker that I´ve been proudly flagging on my little VW: "Well-behaved women rarely make history". It´s been somewhat of a mantra for me because it´s so true: niceness in all honor but I would have missed so many fantastic things had I always behaved as people expected of me. Women are still expected to "behave" in certain ways -trust me I know how deep those norms about "nice girls" live: I teach teenagers and get a dose of gender preconception every day. And yes yes: boys get that too. But this time I want to write about the girls.
Finland is one of the most gender equal countries in the world. This does not mean that it would be paradise. Sometimes I hear people say stuff like "Oh but women are treated so equally here in comparison to other countries, you really shouldn´t complain". Well I´m very sorry but until both sexes and all in between have exactly the same rights and equal paychecks there´s work to be done. And the prejudges live on. Proof follows:
Have you heard of ski-jumping? It´s a funny looking sport where a person jumps down from a high tower while attached to a pair of skies. Sounds weird,right? It´s very popular in Scandinavian countries and mid-Europe I guess... Some Japanese jumpers I´ve heard of but as you guessed I´m not a big fan. So why on earth do I take up ski-jumping in a burlesque blog?! Besides from being pretty camp it´s a sport that has -at least in Finland- been very male-dominated until lately. Then The International Ski Federation Council decided that one of the competitions should be carried out as a mixed competition. With girls AND boys! This didn´t sit well with the Finnish coach Matti Pulli who now openly moans about how it´s not a "feminine" sport and that girls really should not attend since "After all, we are talking about the World Championships here”. You can read the whole ugly ordeal here: Helsingin Sanomat International edition
Okay. Let me get this straight. Since it´s a big competition women should stay home and not come mess up the boys hard work?!?!?!?
Let me remind you: this is said by a dude living in the TOP 3rd gender equal countries of the world: Huffington Post: Top Countries for Gender Equality
It leaves me speechless. Women have been put "into their places" and forbidden from taking part in politics, social life, religion...you name it and very often it´s been with some lame-ass cockadoodle about what is perceived as "feminine" or that the uterus might get hurt or Goddess knows what else. Same reason but reversed is why teenage boys are afraid of hugging each other: because it´s perceived as not-masculine aka feminine aka "gay".  It drives me MAD. This stereotypical labeling of people just because you happen to be born with *something* between your legs!!!! Wake up people! A lot of us don´t feel we want to be defined by our bodies only! Some of us don´t even feel like we have or want to have "a gender". Maybe I have more than one. My darling says to me sometimes I should stop scratching my balls.
I love to play around with my feminine side. My big dream is to grow up to be a Faux Queen.
I don´t have a problem with having boobs, I just have a problem when I´m banned from doing stuff because I have them.
So I will leave you with some of my idols: Mitzi, Felicia and Bernadette who prove crystal clear that Simone de Beauvoir was right: One is not born a woman, one becomes one.
P.S I know, I know...who gets to define "feminine" and "masculine", how we perceive it, what is sex/gender anyway, cultural differences and so on. I know, ok? I just needed to get this out of my system :)
Posted by Gigi Praline at 4:42 PM 2 comments: 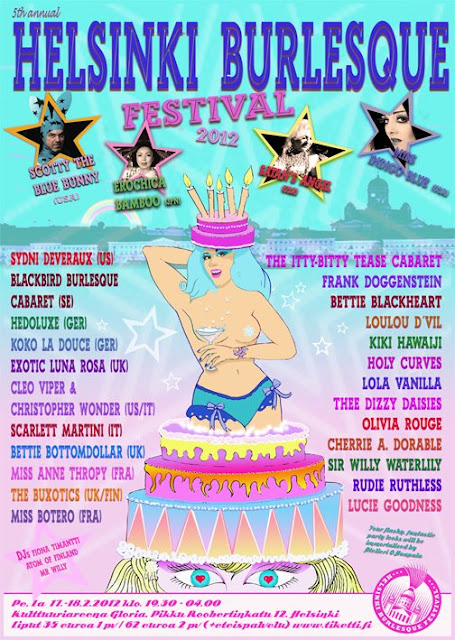 I have the immense and utter pleasure and honor to be a part of next years Helsinki Burlesque
Festival´s main events! It´shall be special since it´s the 5th anniversary! Thee Dizzy Daisies will shake their tail feathers: the planning has begun as we speak and I can´t say how superduper-excited I am...
There will be workshops, wonderful people and a whole lotta bling let me tell you. The theme is "Over the Rainbow" - can´t wait to see peoples outfits! And Miss Indigo Blue will be there, I took her workshop last time she was in Helsinki and loooved it!!! Hugely inspirational! Not to mention the legendary Satans Angel! And Scotty the Blue Bunny! And many many more! Wow!!!!
Just the thought of it makes this icky November darkness seem a bit lighter. Well, I was just moaning today about how people already have put up Xmas lights in their gardens...I know it´s the drill in the US (out comes Santa, his reindeer and elves on the green lawns!) around Thanksgiving but I really can´t get used to it here at home. Maybe I´m just being boring. In my family even the tree wasn´t decorated until the morning of the 24th so maybe I´m just not used to it. Shit. Maybe there is a point to "holiday lights" - it is the darkest time of the year?!
Or maybe it is, as someone I know pointed out, a matter of taste. Or lack there-of. As much as I love bling and glitter I just can´t see the beauty in the neon-lights shaped as candy canes blinking away... So I feel a little like the Grinch, moaning and groaning and peeing on peoples Holiday parades :)
I´m going to wait until the beginning of December for my garden lights, until then I´ll settle for candles -and glögg (Scandinavian version of Glühwein: warm, spiced up red wine)! That should warm up these moaning bones!
Now, I shall leave you with the lovely Dorothy and Toto who already went over the rainbow (and whose red ruby slippers I might have to steal...)  and bid you good night for now! Ta!
Posted by Gigi Praline at 8:56 PM No comments:

I should be in bed. Really I should. But I just came back from an evening with drag queens, a competition no less so sleep is irrelevant. I have to say I take my hat off for those who judge those things, -I would NOT want to get the anger of a discarded drag queen upon me!

Anyway, on that note I was scrolling in Lola Vanillas fb-pictures and found these taken at the Finnish Burlesque Gala a few weeks back. Sorry love - I stole them :)

Boylesque is marvellous. And we have some excellent boylesque in Finland, both solo performers and then this: The Hell Monty. I´m in luuuv!!!

If you ever get a chance to see them anywhere GO! I´m not going to go into this anymore in this state of mind, one has to see it to believe it.
P.S Congrats to Sunshine Addison for coming 3rd in the drag queen competition <3

Posted by Gigi Praline at 1:03 AM No comments: