I haven´t been to too many festivals this Summer (none, to be exact!) but right here at the end of it I managed to get my bum into a couple of awesome gigs! Last weekend we went to see Jon Spencer Blues Explosion play Tavastia in Hellsinki and today I spent the evening at the Hori Smoku Summer Boogaloo-happening with Sandy. Great punk bands <3 I think my favourites were our very own Finnish Heartburns as well as Räjäyttäjät (thank you to the singer who stripped all full monty to our viewing pleasure) and of course the punk legend Death from Detroit. The whole thing had a really good vibe to it, great atmosphere and I felt right at home. It was also REALLY hot and sweaty so unfortunately we had to go outside in the middle of the gigs for some air :) But hey, soon we´ll have 3cm of snow on the ground so shouldn´t complain, huh?
Enjoy while you can <3


Posted by Gigi Praline at 1:48 AM No comments:

I can finally spill the beans on this piece of marvelous news: Thee Dizzy Daisies will be performing at the New York Burlesque Festival this September! Four days of glitter mayhem in Gotham city - COUNT US IN <3 We are so happy and honored to be able to do this!!! Will keep you posted! In the meantime, do enjoy the fabulous Summer heat - 2 weeks until it´s back to school ;) 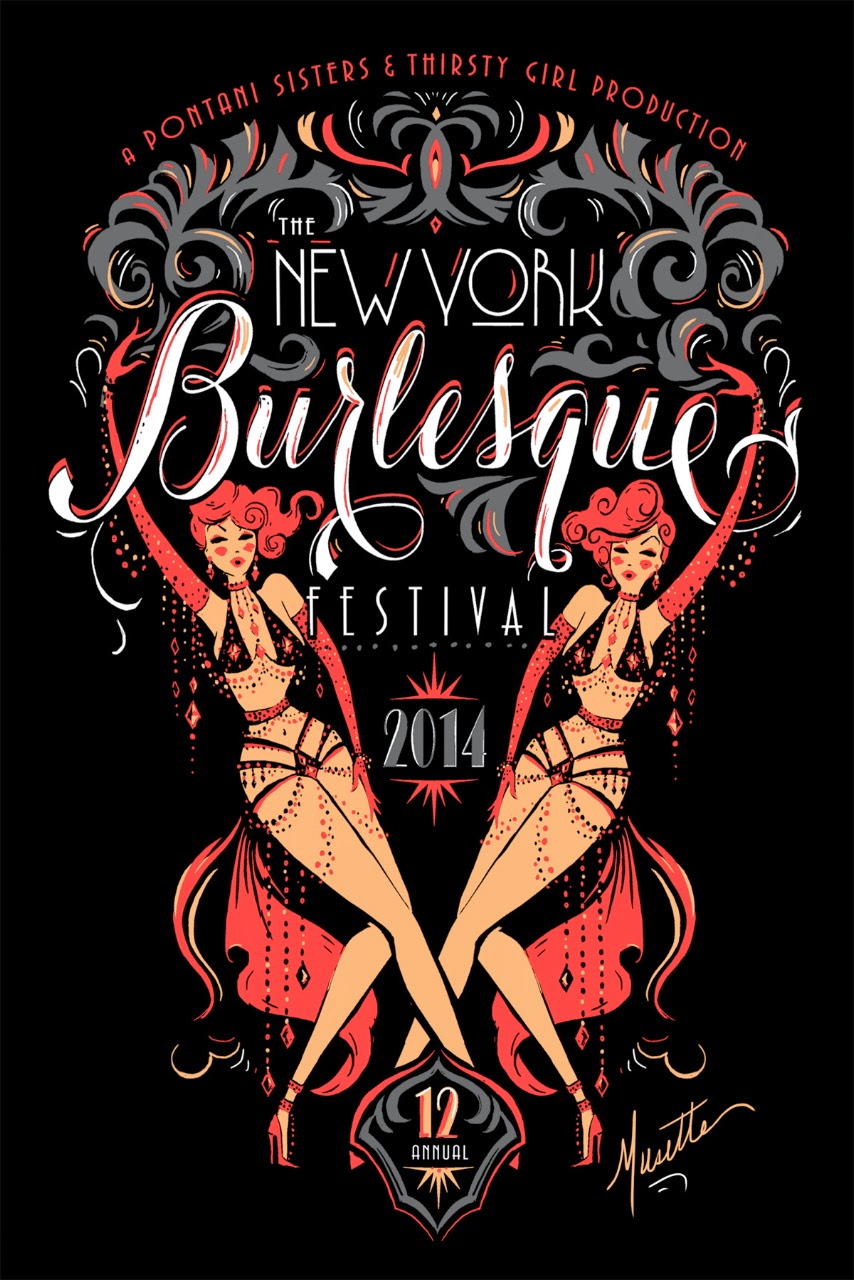 Posted by Gigi Praline at 9:12 PM No comments:

I have been told that one of my strong sides in performing is a very expressive face, that watching me is never boring because so much is going on in my face and eyes. That´s a good thing, right? Yes it is -until you get those pictures taken from a show :) !!! I have seriously been at lost since there are only a few I can use because my face looks so weird. Before going on stage I think "let´s calm this down a bit tonight" and then...I forget myself! Which, I suppose, is a good thing but also something I have to work on. NOT because of the pictures but because *being aware* on stage is a good thing from time to time. So while I go work on that here´s a few pictures from Midsummer Night´s Dream at Teerenpeli Tease in June! All pictures by A-P Hakanen! 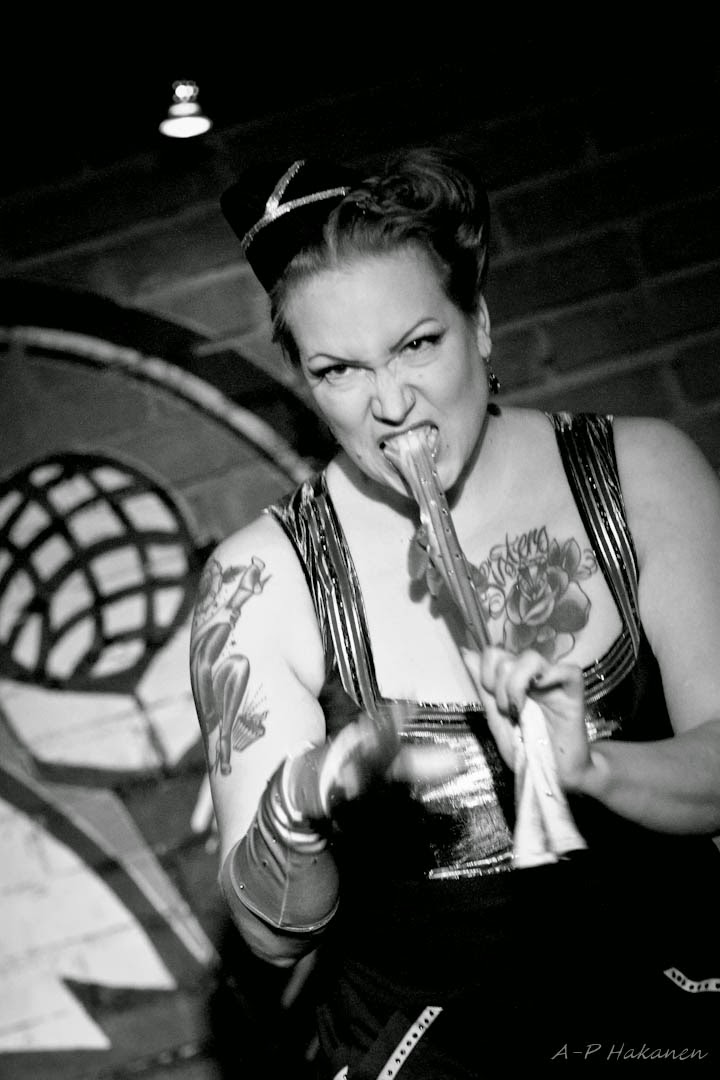 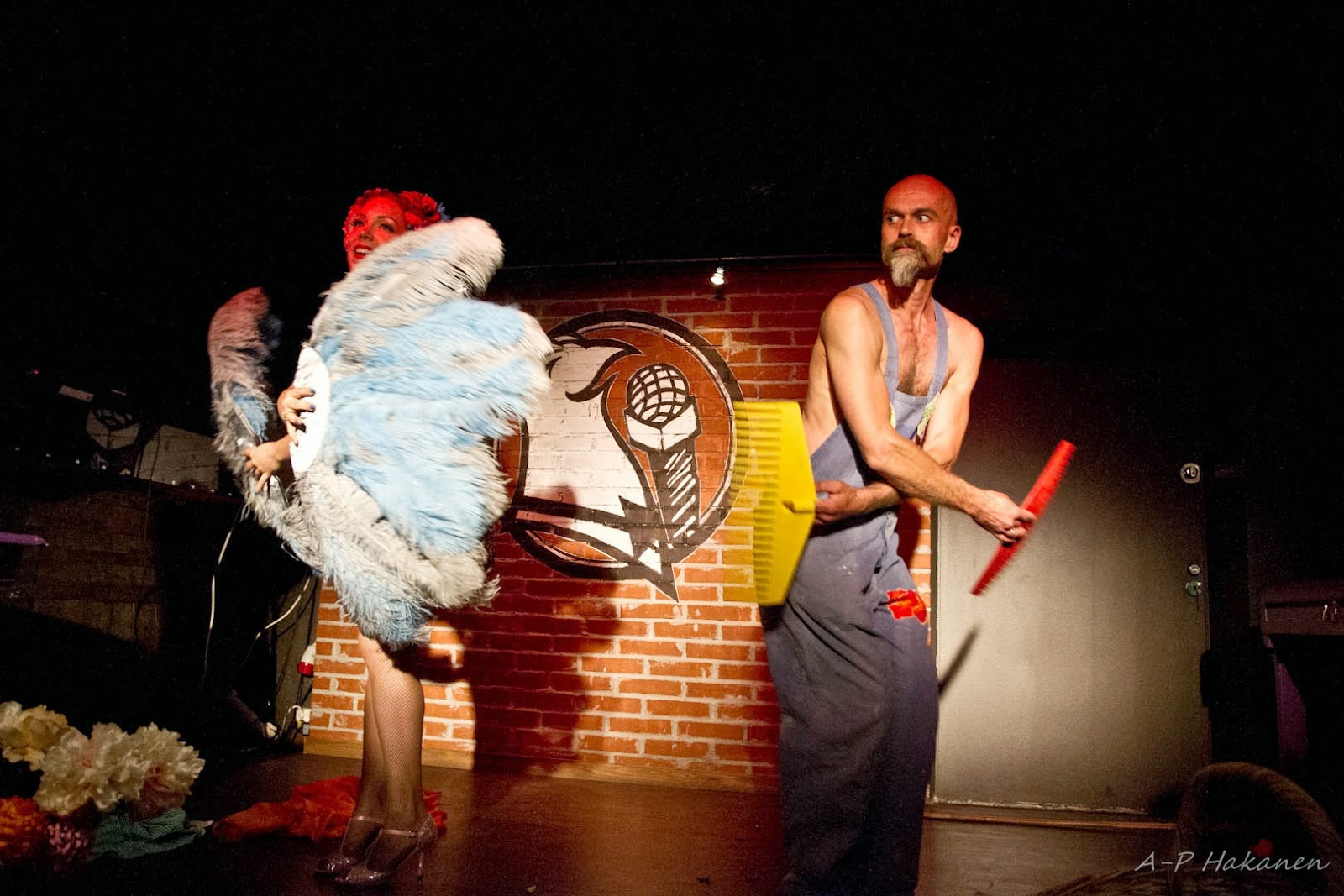 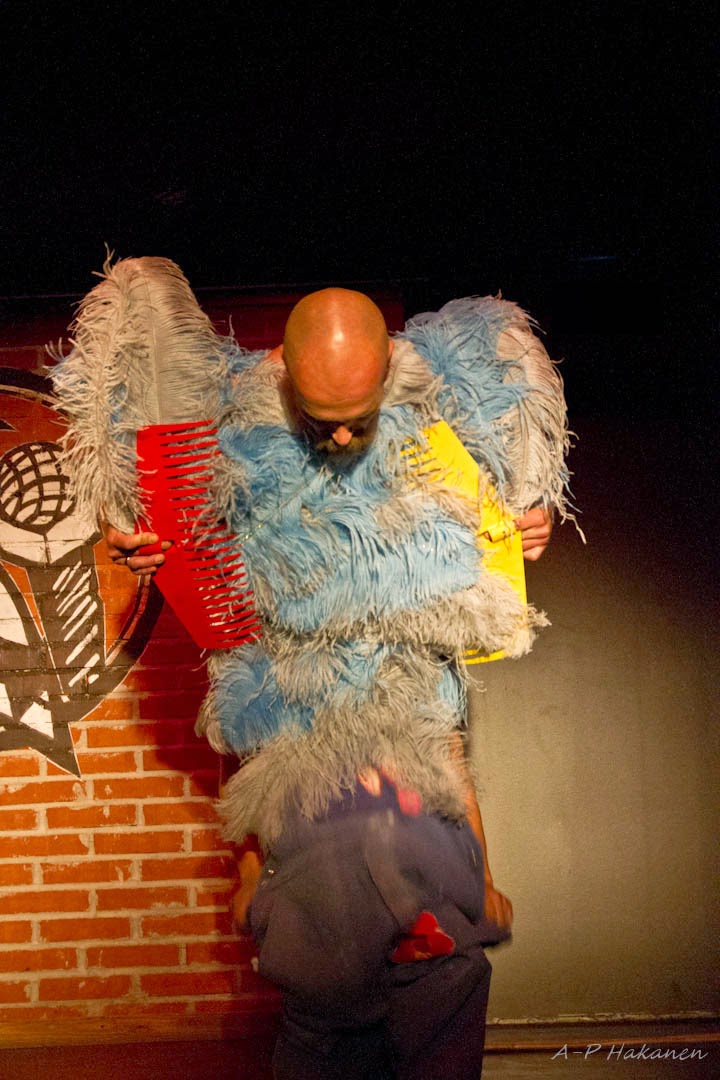 Posted by Gigi Praline at 9:30 AM No comments:

There is still Summer left but one has to start looking out for the things in Fall... August will spread some major glitter since the *First Ever* Finnish burlesque magazine will see the light of day thanks to the wonderful Kiki Hawaiji! 'Paljettipommi' - burleskizine will be celebrated with a BIG sha´bang at Wäiski and the tickets are on sale so be sure to get yours!!!

Posted by Gigi Praline at 1:29 AM No comments:

Faux pas and how life goes on

There has been a lot said and written about making mistakes on stage so I can´t really come with anything new but my own, limited experience. As I´ve said before I´m having a pretty bad case of stage nerves before the shows and even if it has gotten better (thanks to Scotty the blue Bunny´s and Tigger!s brilliant advice that combined would be sth like: "BREATHE. Remember to HAVE FUN and why you are doing this!") it´s still a strange moment backstage. I can get really odd, depending on the show I can be weird all day :D But these days it (usually) blows over once I actually hit the stage. What happens on stage is a different thing, the adrenaline takes over, you get carried away with the momentum. Of course this does NOT mean that everything would go as planned or rehearsed! Wardrobe malfunctions are very common: something gets stuck or breaks and then your timing is just f*cked... I had this happen to me last Saturday again: it was the premiere of my new version of "Diamonds" and my bra got stuck on the zipper of the dress as well as my tassel got a bit entangled with my glove and loosened it up enough to have the whole bloody thing fly off when twirling!

I´ve noticed that the more you screw p on stage the better you become with dealing with it. The optimal would of course be, that *everything* goes smoothly and you seduce the audience with a impeccable show that has impeccable timing and perfect everything...but as with life in general it doesn´t work that way!!! So being prepared is your best bet to turn a stinky situation around. This being said: you can´t prepare for everything. On Saturday the zipper was SO stuck actually that it got really absurd and I had to really keep myself from bursting into hysterical laughter as I manically thought how the hell I would free myself and what if I just couldn´t do it and THEN what....as these manic thoughts ramble through your mind you just have to try to look as composed as possible and as if this is ALL part of the show. Yeah, right! My saving was that nobody had seen this number like this before and even if it was pretty obvious sth was wrong I had Lady Luck on my side and the dress flew off *the minute* the music changed! :)

Music might get stuck or stop in the middle, the DJ might play somebody else´s music, the chair might break, your heel might get stuck....the list of possible cock up´s is endless. But if you only concentrate on what can go wrong you forget to enjoy the ride. I´ve noticed however that there are a few things that help me:
- Always do dress rehearsals. ALWAYS. Do it with every single piece of jewellery and nick-knack you have planned to bring on stage. I can´t count the times that me (and the Daisies) have discarded something or noticed that we e.g need to cut open frillies so they don´t get stuck on our naval piercings or on something else...
- Be thorough. I can´t prepare for everything. Even if I at rehersals think "ok, now I´ve covered every possible mistake" life still has a way of throwing you a curve ball on stage. But I can do my best: using shoes with heels and straps that won´t fly off, pinning my headpieces properly, checking that the frillies on my panties aren´t in between the dress etc. It will only take a minute or so backstage, don´t be sloppy. And trust me: most of this I have learned the hard way aka by making the mistake :D
-When something goes wrong (and eventually it will) do as they say in the Hitchiker´s Guide to the Galaxy: DON´T PANIC. Your skills with be tested to the max at these moments and the audience will love you even more when you carry on and OWN the situation! I´ve seen the audience clap and sing along when the music broke so the performer could finish her act. It can help if:
-I have a Plan B but like said before, it might not happen the way I thought so ... I´ve noticed that the more I´ve performed the better I can handle these things but that´s just the way with everything isn´t it?
Which brings me to:
-Practice both your act but other things as well. Take classes may it be dance, kick boxing or yoga, something that will better the way you feel about yourself because this will show on stage. If you love yourself you are ready to love your audience!
- Remember to ask feedback from seasoned performers, -not just your friends!!!! I find constructive criticism (meaning something I can work with, not just "it was great" or "it sucked") very helpful! This goes on giving feedback as well - not liking an act is not the same as giving feedback. We can´t like them all. I usually don´t give my 5 cents unless asked for it but I try to find something good in everything as well as not to give overly positive feedback when I don´t see it fitting. "LOVING IT" when you actually weren´t moved at all is not going to help anyone make it better. It´s like with my teenagers at school: if I have to say something that isn´t so nice I try to find something positive to say as well.

And as I´ve said before: go to workshops or take private lessons, we have some REALLY good teachers in Finland (Burleskinstituutti) who can help you! I often get "blind" to my own numbers. Having a colleague sit in when you perform or just to have someone tape your number can also work well -just as long as you watch it later and are prepared to learn from the cockup´s :) Doing burlesque gives us the possibility to be our own costume designers, coreographers, music- and lightning designers etc and it´s great but sometimes another, valued opinion (or two) can be real helpful! This does not mean that you have to try to please everyone (because it´s impossible, duh!) but to open yourself up to growth. Plus very often things have been done before you know...so again: do your research!

I´m sure other performers have more to give you on this but right now my brain in empty haha! Hopefully here´s something to go on. Oh, and wanted to share my BurlesqueMama Bettie Blackheart´s thoughts from her facebook update about a thing that many performers might not realize: try not to sing along to your songs! Lip-syncing is an art form hard to do (and wonderful) so miming some of the lyrics to your song while performing will only take away from your facial expressions! And the face is ve-ry important!!!!

This been said and in the light of things I learned from last Saturday I still have many things I need to work on before bringing "Diamonds" on stage again at Paljettipommi in August!
It´s not about the destination, it´s the ride -so enjoy <3

We seem to have brought the fine weather with us, inland is FINALLY sunny and warm! Hurrah! This means we are having hay work today (yeah, that time again) and it´s time to start thinking about the Autumn shenanigans...BUT before all that do join us at Tampere this Saturday for the Devil´s Auctions open stage! I´ve been wanting to do some changes in my first number ever "Diamonds" and for me a deadline is the best motivator :) So with fresh home from the trip, hay work and a trip to Tallinn tomorrow...well, let´s just say that the deadline ain´t a problem ;)
There´s still tickets left so grab yours!

Posted by Gigi Praline at 8:21 AM No comments: