Thank you everyone at Teerenpeli Tease last night! It was a wonderful, sold out event and as promised: it got HOT in the Teerenpeli basement! Hugs and love to my girl Olivia Rouge for organizing and having me, to Sir Willy for the help and company both at the farm and backstage, to the Flaming Fruitcakes (and Olivia) for helping a girl in need (wardrobe malfunctions like breaking a bra 15min
you´re supposed to be on stage is always exciting...), to Bent for bringing a bit of the Pride march with him and to Bambi, Meau, Heinz and Olli for being lovely! This is one of my favourite events to perform at, always.
Tomorrow me, Tinker Bell avec husbands are starting a very exciting, -and epic I´m sure, roadtrip towards Prague on the Via Baltica so I´ll be off the blog for a week but not to worry! Two weeks to go to the Devil´s Auction open stage happening, at the Yo-talo in Tampere! Tickets can be bought beforehand so be sure to do that and come check us out!!!

Posted by Gigi Praline at 2:15 PM No comments:

Really happy and honored to be able to announce this: Thee Dizzy Daisies will be performing at the Amsterdam Burlesque Awards in November! The Sunday matinée on the 16th! <3 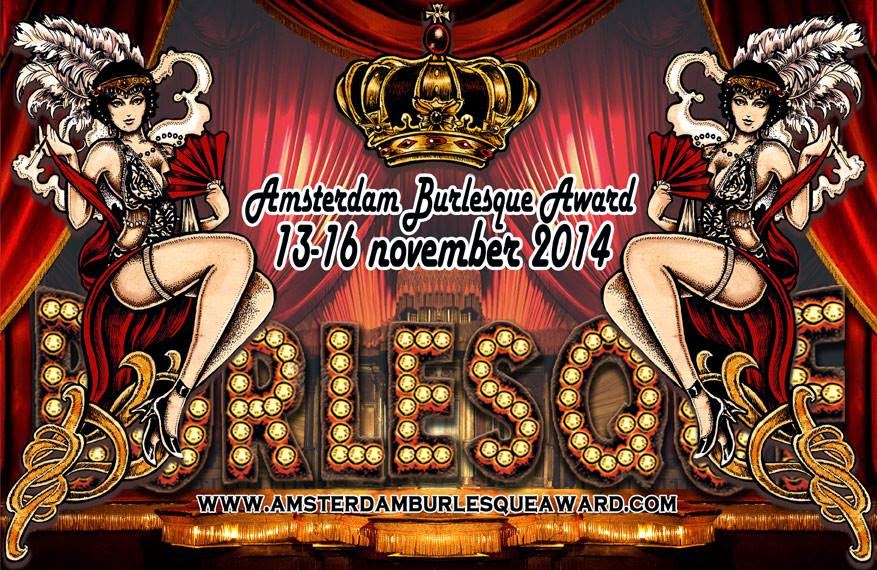 Posted by Gigi Praline at 9:24 PM No comments:

This week is Pride week in Hellsinki but this year I won´t unfortunately be able to march since I have a gig in Tampere that evening, nevertheless I wish everyone a good time for all the events! It´s really important to spread the message of equality -even in Scandinavia the LGBTQ-community is having some real issues about getting the message -and rights, through. Finland more than e.g Sweden, unfortunately. Here the rights of trans-people are being stepped on in some medieval ways: before you can change your gender one has to go through serious amounts of therapy and worst of all you have to go through an operation that castrates you! Plus if you are married before the change, -even if you are happily married, you have to divorce because the Finnish law of marriage is different for same-sex couples. Then if you want you can register your partnership even if it was with the same person you were married to in the first place. It´s utter bullshit.

We still need to explain why Pride is needed. There still is those remarks of "there´s no hetero-pride!" or "why do people need to flaunt their sexuality?". It´s not about flaunting, it´s about raising awareness that yes, even if in many parts of the world things look much more grim, it´s not all peachy here. People have, depending on their sexual orientation and gender preferences STILL not the same value or rights in the eyes of the state (or people, for that matter) and that is a serious issue. I´d like to make a leap into the matter feminism and how women face the similar, hypocritic issues as well but that will be a whole other can of worms and I´ve opened it quite a few times already :) Shortly: feminism is NOT about women (or any other gender for that matter) being "better" than any other, it´s about working towards changing attitudes, norms and right out hrm, "small issues" like getting the same pay for the same jobs as every one else. Or that it won´t be the girl getting raped and then getting the blame for dressing a certain way. Or getting shit for not "giving sex" when some moron goes and shoots a bunch of people because he was " a nice guy but never got any".  Or why she is being "slutty" when he is just "a player". Ohboy. I went there, didn´t I? ALL genders should be feminists! This includes boys/men being able to be all they want to be as well: not just masculinity in one way but to be all those attributes that our societies often lable as "feminine". Stop trying to put people in to boxes and except that we are all different, all equal.
A note 15min later: I just read this article about The strenght in being a feminine gay man that both Meth and Bent van der Bleu posted and its a great summary from another corner about the same issue <3
Added about an hour later: this really starts to feel like one of those "everyone-has-the-same-brain"-moments....Scotty the Blue Bunny just posted this with one of Exposed! the movies performers Rose Wood.

WELL. Before I get too carried away politically here´s some pictures from the Boylesque festivities (from Wednesday) that took place in Vienna this May! Huge love to everyone involved <3

OH! And do NOT miss the Pling Pling Party at Dubrovnik this Wednesday! My gals Bettie Blackheart, Lola Vanilla, Laila-Annikki Koivunen, Linnea von Kattendam and Minna Kivelä will be there for your entertainment as well as Elsa Gaselli and Lollers <3 No tickets before the event, just bring cash and love to the door!!! 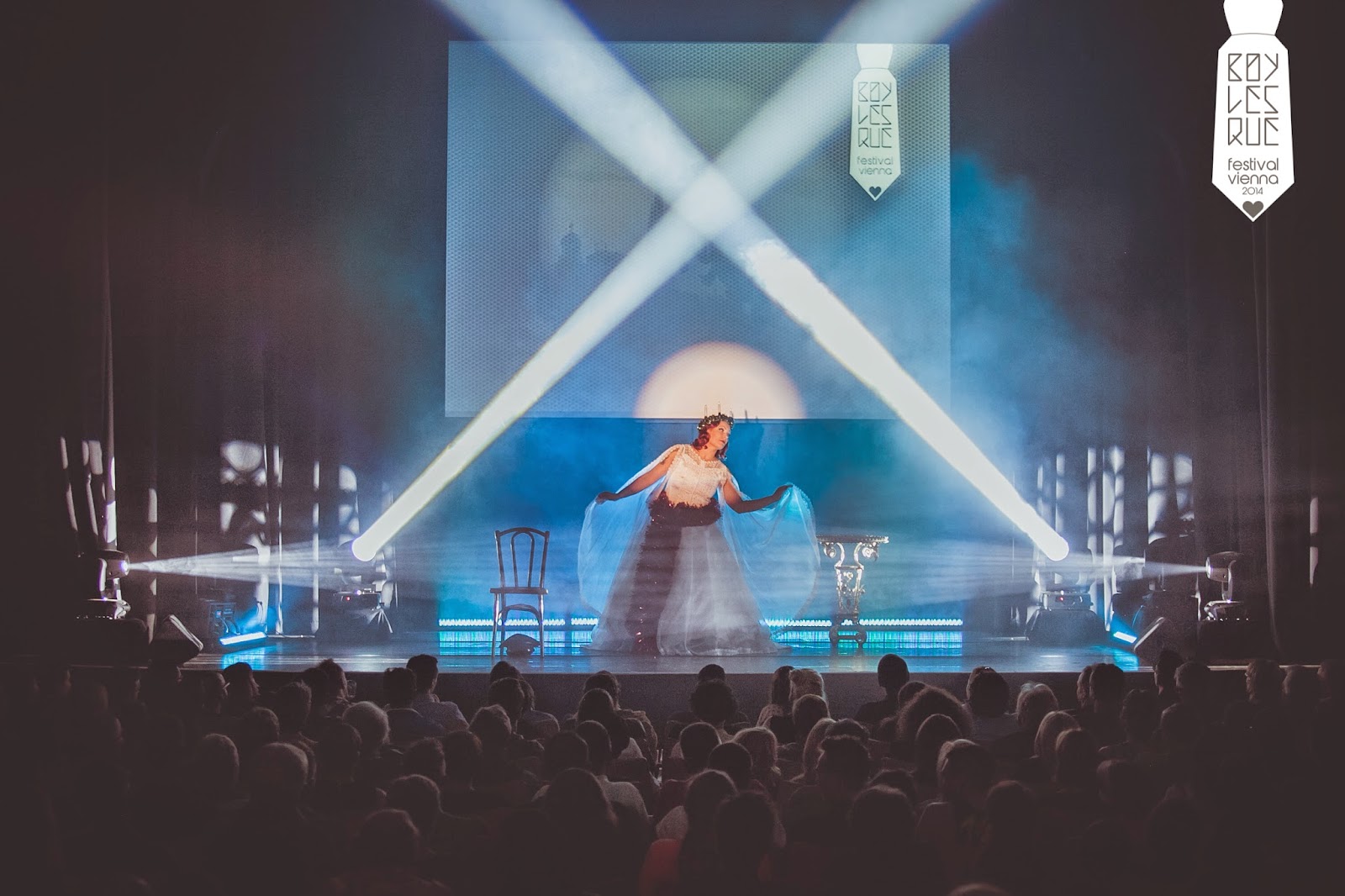 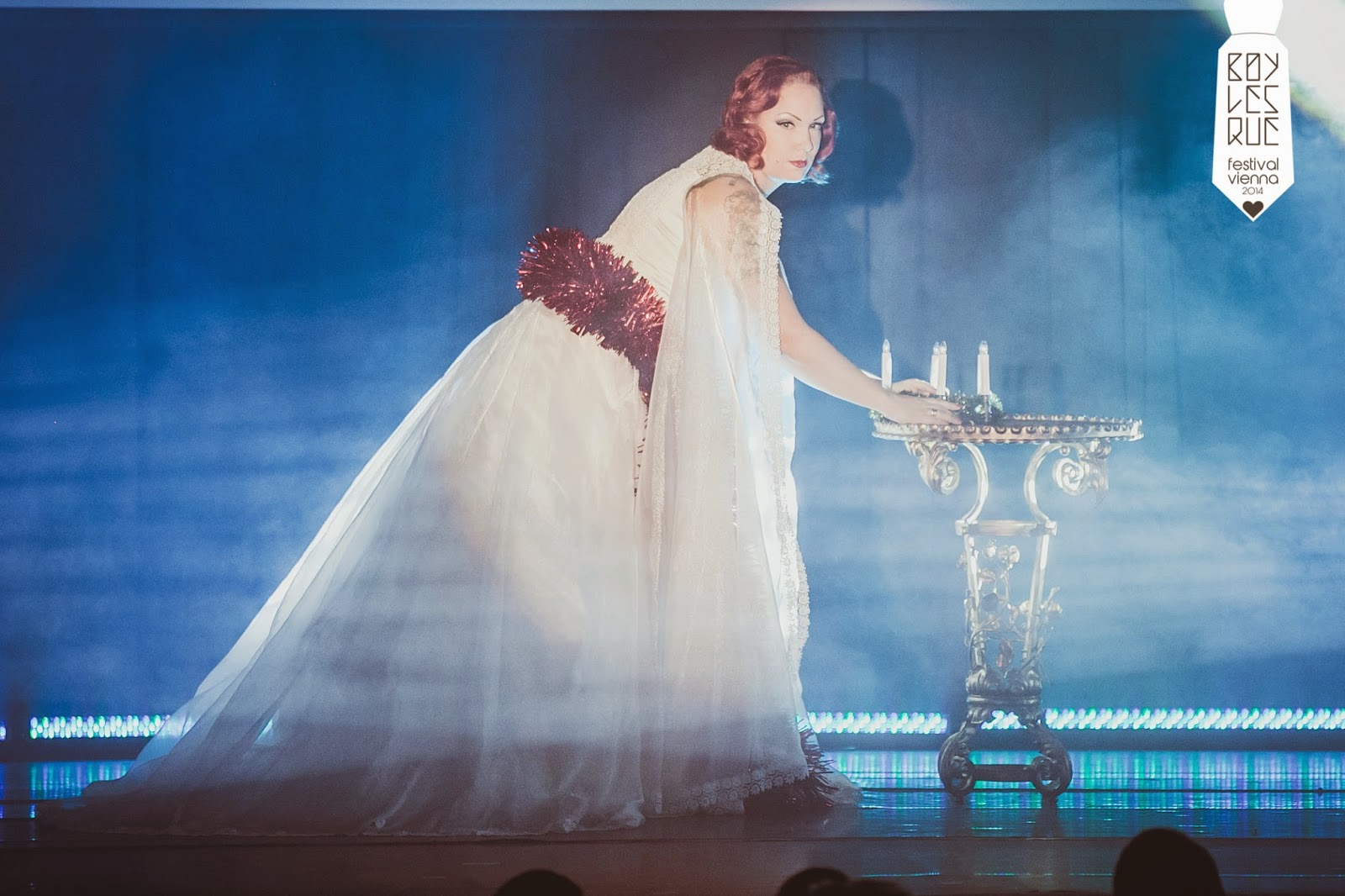 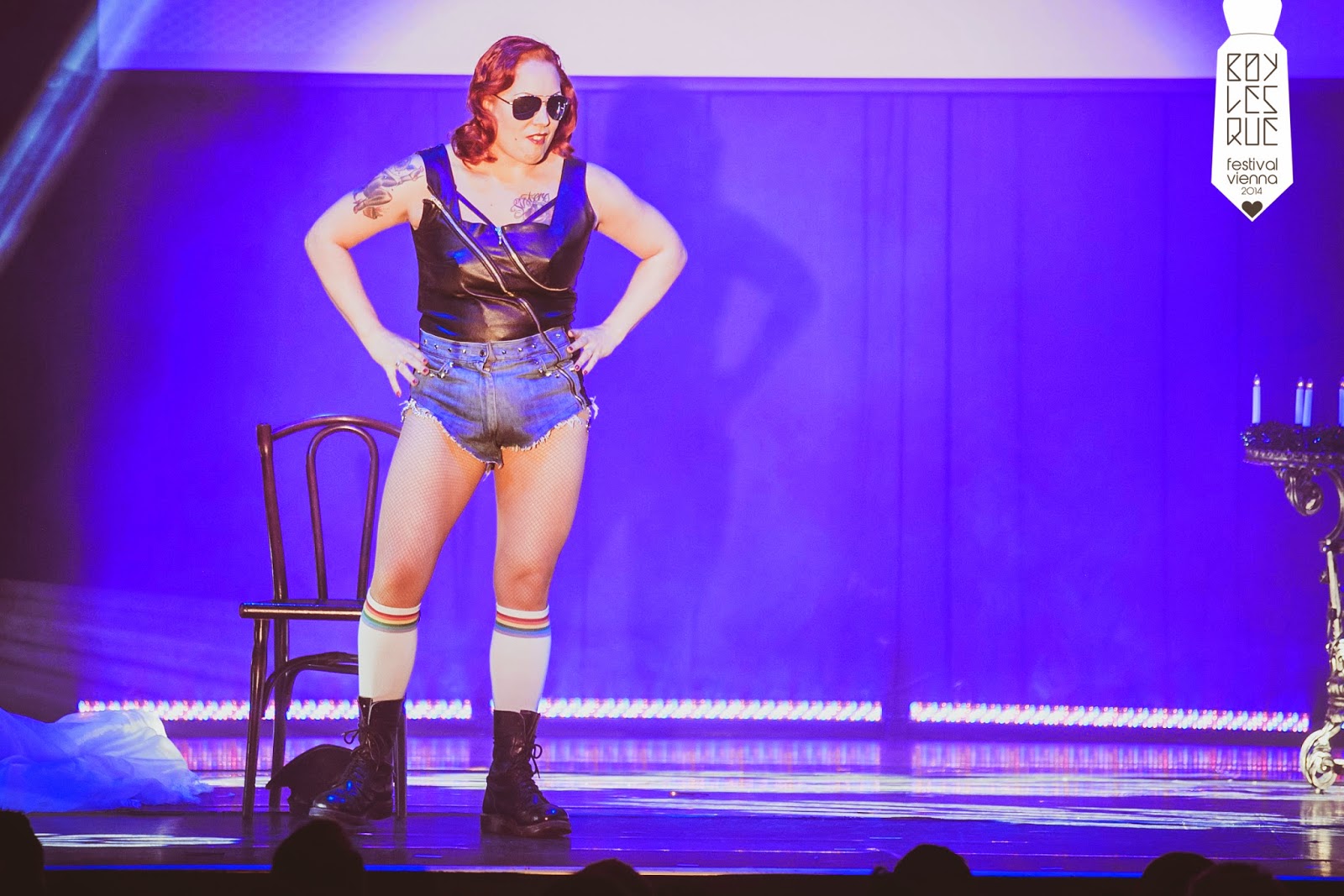 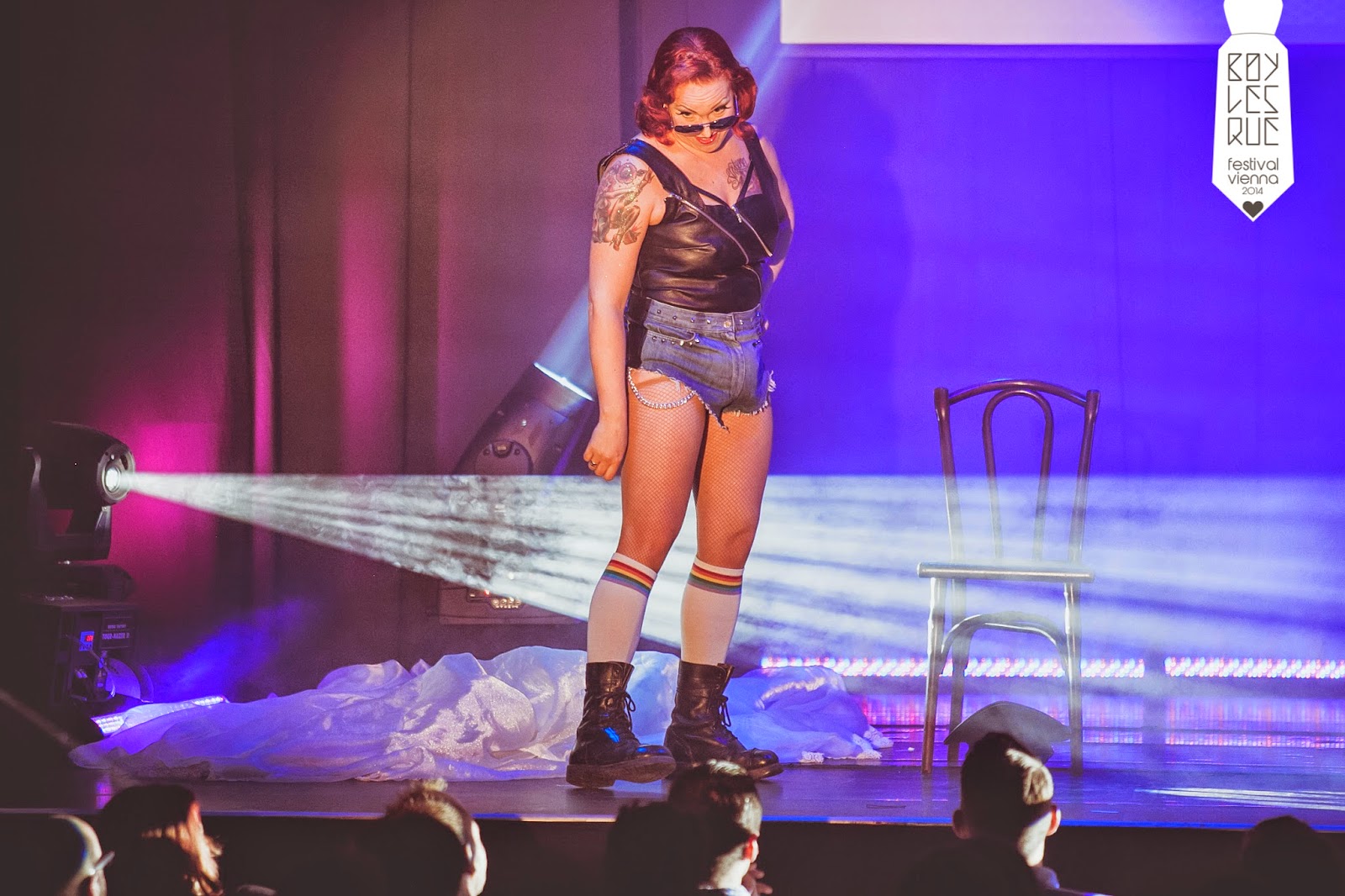 Posted by Gigi Praline at 10:39 PM No comments:

Have a relaxing (even if a quite cold here in Finland) and wonderful Midsummer celebration! Please be careful, don´t drink & drive - even boats...
Remember that Teerenpeli Tease will be on the 28th this month, see you all there <3

Posted by Gigi Praline at 7:15 PM No comments:

Here´s more photos from the Blazing Burlesque stage!
It´s been pissing down raining almost ALL day here but small things made me happy...like that huge, bright blue flower pot (that matched our doors, thank you Emiliano for a paint job well done last Summer <3 ) that I filled with pink and blue flowers and my trip to the library where I found proper Summer reading ( the latest Swedish detective novel by Mari Jungstedt- the series is awesome!, a book written by Charles Bukowski´s old flame Pamela "Cupcake" Wood (Bukowski was one of my favourite reads back in the day, right up there with Henry Miller) and the biography of Robert Plant. So rain or no rain, I´m set!!!

Posted by Gigi Praline at 11:24 PM No comments:

My Summer took a roaring start when I got to go to Tampere and perform at the very *first* burlesque-only stage at a rock festival that Olivia Rouge and Albine A. Dorable produced for the (also first ever) South Park-festival at Eteläpuisto! HUGE love and thank you´s to the crew in charge (this including DJ Tiina, Petra-Miisa also as an organizer and Vappu for being our all-in-all etc) and my fabulous co-performers!!! I got to meet wonderful Natsumi Scarlett -who is a fabulous person as well as a real star on stage, shared accomodations at Lassi´s & Marianne´s ultra-vintage flat Käpylinna with Miss Chrissy Kiss, getting to know Miss Acrolicious a bit better... and just spent the most memorable weekend with good people. Meeting the people before, having brunches and spending time just made the whole thing uforgettable. Not to mention that *everything* was thought of! A great example of a well produced show <3 I´m so extremely lucky to have been able to work with such professionals: from Helsinki to Vienna to Tampere in such a short period of time!

After that I packed my little Polo and drove off to Northern Carelia to spend some time at my dad´s birth home...it´s lovely -cottage life at it´s best but the only thing is that my internet works really badly there and thus I wasn´t able to give this post to you earlier. Oh well! But now I´m BACK, bags (and all of it´s wrinkled silk and stuff) unpacked, washing machine singing and ready to get the next bit of Summer going! SO: what´s going on?

It will be more Tampere for me in the near future! At the end of this month I´ll shake my tail feathers at Teerenpeli Tease, also including our duo-premiere with Sir Willy Waterlily! premiere in that fine city so don´t miss that! Sir Willy also wrote a good piece about Vienna, please read it here ! I´ll end this rant with some backstage photos from our Friday night at the Blazing Burlesque stage... Do stay tuned for more ;)

Posted by Gigi Praline at 10:08 PM No comments:

Yeah! Last Summer me and Pepper started out performing at Sauna Open Air in Tampere and THIS year we will get to rokk out at the South Park-festival! I´m absolutely *thrilled*: Holy Curves! have produced a kickin´ show and we have *a whole stage* to do it! The BLAZING BURLESQUE stage!

Both Friday and Saturday me, Pepper Sparkles, the Holy Curves!, Miss Chrissy Kiss (EST) and the wonderful Natsumi Scarlett (NL) will make sure it´ll be hot and humid (no matter what the weather will be haha!) Other than that there will be my teenage-love Skid Row ( saw them live too long ago to even say...), WASP, Sonata Arctica, Europe, Reckless Love...it´ll be a hair metal fest to the max <3
As I am bummed I have lost my (self made) Skid Row-jeans vest somewhere in the past I´m looking forward to maybe meet the  guys and get on with this craziness! I´ll bring my newly pimped "In Flames" for your eyes only and some other shenanigans as well...

So, Tampere: I´m coming for you once again!

Posted by Gigi Praline at 9:38 PM No comments:

I love being backstage with my fellow Glitter Tribers - at best it´s laughter, nakedness (yes Florian, what you witnessed wasn´t anything strange ;) bad jokes, selfies, glitter and just a lot of mayhem that then all of a sudden just come together and become a great show! I say "all of a sudden" but it´s actually a result of practicing your act and knowing what you do. People react differently before going on stage: some are very talkative, others pull away to concentrate. I am of the latter kind, I´m very quiet and weird and last Wednesday I was that way all day it seems. We went for lunch and coffee with Sir Willy Waterlily who was in town already and he kept asking me if i was ok since I was acting so strange :)
There´s been a lot of good stuff written about backstage etiquette (e.g in Jo Boobs "The burlesque handbook") but just remember that try not to take up too much space (physically or mentally), be nice to people and have those emotional antennas out so you can read people and not make an arse out of yourself. If you are unsure of something, ask -and be polite.
Wednesdays´ backstage in Vienna was really good! There were A LOT of us crammed in a small space but it seemed it was very frictionless and -at least to me- there was an air of mutual fun and relaxation even if it was hectic. I met some amazing people that really are SO enormously crazy and great that I´m still floating on air! Thank you everyone for giving me this rush of love and inspiration!

Posted by Gigi Praline at 11:31 AM No comments: