Posted by Gigi Praline at 8:45 PM No comments:

This Saturday the Teerenpeli Tease club at Tampere  be themed after the beloved, -and critized- country of ours. If you want to see Finland-themed numbers do head that way! 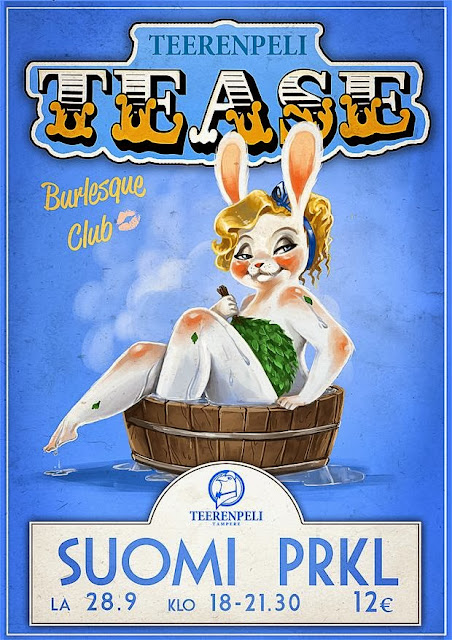 Posted by Gigi Praline at 5:35 PM No comments:

After a beautiful and fun wedding of Olivia Rouge to her Pauli yesterday, it´s time for a movie night! At 9pm tonight Exposed will premiere in Andorra, Hellsinki so you really ought to come, Sunday or not. You only live once! Ida Hirvonen and Bettie Blackheart sums up burlesque very well:

After the movie there is a burlesque show hosted by Welma Jackpot!!! You really don´t want to miss this.

Posted by Gigi Praline at 3:20 PM No comments:

Today starts the week of Manners in Finnish schools, Tapakasvatusviikko. It´s not just about good manners but also about learning, civilization, tolerance and education. Being aware that we are all different and all equal. That one´s skin color, culture, sexual orientation or mother tongue are not choices and therefor you should never bully anyone because of that.

It´s quite simple, really. The Golden Rule is a part of every major religion and culture: treat others as you´d like to be treated. Kids and teenagers are the "main" audience for this week but I´d like to remind adults as well of the Power of Nice. And yes, we all have bad days and go through emotions that for sure ain´t all that nice. But as a rule of thumb, try to be nice or at least civil. Or as a friend of mine put it: don´t be an a**hole. It doesn´t matter if you´re backstage at a show in the line at the grocery store, say hello, look people in the eye when you talk to them and if you´re really courageous smile to that person who is always sitting alone. The worst thing is to think that you´re invisible to others and that nobody cares.

Have a beautiful Monday people! <3 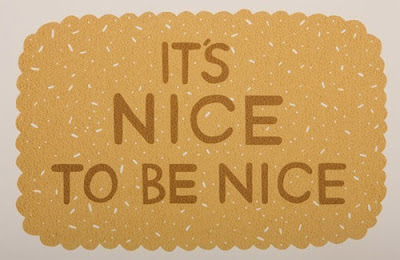 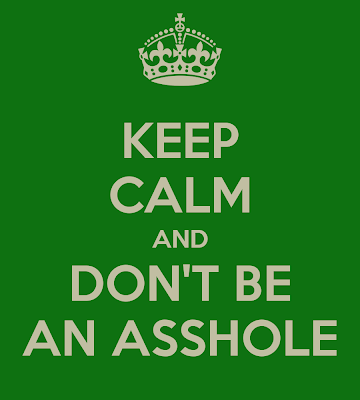 Posted by Gigi Praline at 2:20 PM No comments:

My interview from yesterday is put as podcast, "Hon som inte rodnar" aka ' She who doesn´t blush' is the name of the program and it´s about young(ish?) women who do their thing and don´t apologize for their life interviewed by Frida Lindholm from Radio X3M here in Finland. She´s such a sweetheart! I was in the studio for about 1,5h, just talking about burlesque and teaching since that seems to be the angle that is interesting to people. I need to say a couple of things to correct the thing though. I don´t do burlesque as "a hobby". Why is it important to point this out? Because people get the wrong impression from the word 'hobby'. I take my burlesque quite seriously. As in I rehearse (a lot), I plan, I spend a lot of money & time on costuming, I research and I do get payed for what I do. I try to take every possible workshop I can to better myself in this trade. It might have *started out* as a hobby but today I do it as professionally as I can and hopefully I do it well. And I want to learn more.
Also, as a teacher I have never (to this moment) have never gotten any bad feedback from any of the parents´ whose kids I have the pleasure to teach.  Not about burlesque nor about my colorful being at school.  I do wear leopard print and flowers in my hair and might not be the "proto" teacher but then again...I don´t think there is any prototype for teachers anymore. Thank goodness :) We are allowed to be personalities and also dress accordingly at work. I have discussed this before so no need to go there now.

With that said, do find your long gowns and tails and come to the Finnish Burlesque Gala held at Astoria in Hellsinki on the 19th of October to help us raise money for the festival! Thee Dizzy Daisies will have a brand new (and not typical for us..) number to premiere there!

Have a beautiful Friday! 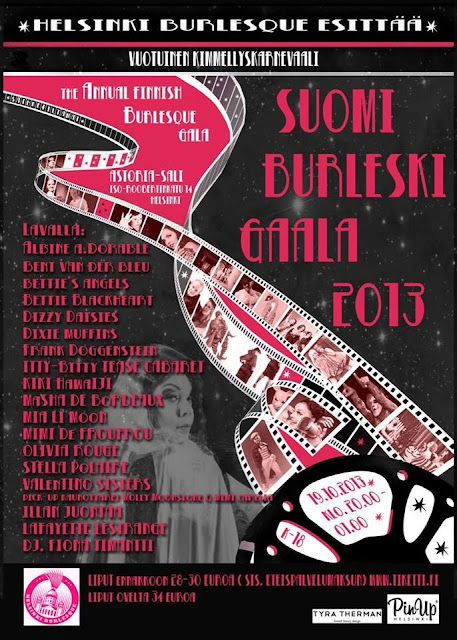 'Lainsuojattomat', or 'Outlaws' in English, is a theatre festival for independent theaters that is organized yearly in Pori. Me and Sir Willy Waterlily had the immense pleasure to perform at the ending club (the festival is all week) last Saturday with good company on stage. Our duo premiered and got such a good response I feel pretty certain this "Garden of Eden" will be performed again :) It really was a great night, the whole thing so well organized and we were so nicely taken care of! Thank you Kaitsu and the gang for that! I also met a very inspiring, talented and charming young man, Rudirok. He makes "sounds for a living" as he put it, beatboxing and imitations and he´s also one funny guy on stage! His story is pretty amazing so if you ever have the chance to see him on sage or meet him anyplace you most definetly should go! Such a sweetheart.

On a totally different note, this week has been pretty hectic but good. Tomorrow I´m being interviewed for Radio X3M, I´ll tell you more about it later and yes, yes also when it´s out. It´ll be about burlesque, teaching and norms...or something.
The new group number we are working on with Thee Daisies is coming along nicely and more practice tomorrow as well... It´ll be a different number to anything we have done so far! I´m pushing my own limits here again with learning things that I have *no clue* how to do so keep your fingers crossed... Good news is also that I have a little ...erm, actually it´s NOT little at all! something on the way from Las Vegas, -a big, huge thank you to Bettie Blackheart and my girl Heli in NYC for helping me get it to Finland!
A lot to see forward to, then :) With this secrecy I leave you with some photos from last Saturday (a lot of them taken by Sir Willy). Have a grrreat Wednesday!

Thee Dizzy Daisies are available for workshops, pin up duties/modeling and burlesque entertainment! You can book one, two or all three of us for your party! Gigi also does a duo with Sir Willy Waterlily if masculine handsomeness is required :)
You can e-mail me (gigi.praline@gmail.com) or reach us all through daisies@theedizzydaisies.com for more information!

Xmas season parties are here soon so be sure to have some good entertainment!
Posted by Gigi Praline at 1:29 PM No comments:

This Saturday, the 7th of September, there is a LOT of burlesque happenings in this country! If you are in Hellsinki, be sure to go to the restaurant boat Wäiski for the 2nd Velvet Tea Room where, among others, my girls Sandy Jungle and Pepper Sparkles will be performing!

In Tampere there is the annual Circus meets Burlesque with the Reigning Queen Loulou D´Vil headlining and also Bettie Blackheart and The Finnish Blonde Burlesque Troupe among others performing! 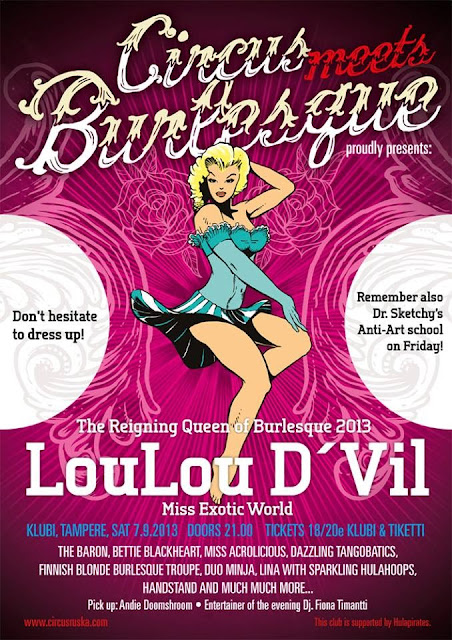 And, last but by no means least, yours truly and Sir Willy Waterlily will be debuting our brand new duo in Pori at the Lainsuojattomat -theatre festival club!!!

So my dear friends, there really is NO reason for you NOT to see some tailfeather shakin´ this weekend!
Posted by Gigi Praline at 1:15 PM No comments:

Friday gig was Tiina´s and Esa´s wedding in Ruissalo, Turku. As usual a picture tells more than a tousands words so here´s the backstage photos from Friday!

Posted by Gigi Praline at 5:02 PM No comments: 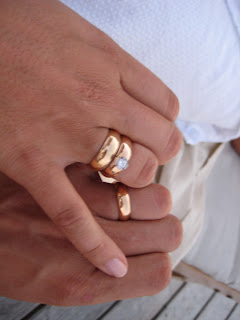 Today is our 6th wedding anniversary so instead of posting the photos from our gig on Friday I´ll share this :)  Yes, yes...gig photos will appear later!
What I´ve learned these past eleven years together is that a relationship is hard work and you should NEVER take the other person for granted. I also hope, remembering how great our day was that sunny September in 2007, that Finland will take it´s head out from it´s arse and legalize marriage for  the rainbow-community as well. It´s an important issue, and the civil union that we have now is not the same thing since it´s not giving the same legal rights as marriage.  I don´t care what it will be called but everyone should have the same rights since we all pay the same taxes. It´s appalling that we stand closer to Russia than Sweden on this subject, and I hope it will be changed soon!

Much love on this rainy, autumn-y Sunday!

Posted by Gigi Praline at 2:16 PM No comments: